IPM to relocate to Taipa with cultural creativity academic center 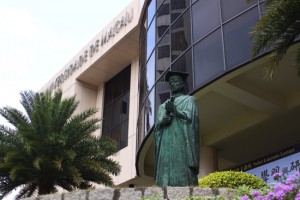 The Macau Polytechnic Institute’s (IPM) new campus will be located at the former site of the University of Macau’s Taipa campus. According to IPM president Li Xiangyu, the new site will house a new teaching and research center for subjects such as cultural creativity, Portuguese language and gaming history.
Li told the media yesterday that the university doesn’t expect to make relocation plans until next year, as a number of budget and administrative procedures have yet to be solved.
“When we were allocated this campus, we didn’t have the budget for it. Only when we have the budget next year, could we actually [relocate]. Right now we are speeding up the design process, because designing doesn’t cost much money, but the actual relocation depends on money,” he explained.
Speaking at a graduation works exhibition held yesterday for IPM’s design and visual arts students, the president stressed that, with the MSAR government being committed to developing the cultural and creative industries, the prospects for graduates in cultural and creative industries would grow better and better.
“I think the current employment prospects and conditions are quite good for these students, and there’s no doubt that they will be even better in the future. (…) Seeing their exhibition works, I think there is full of hope,” said Li, adding that currently about 90 percent of those fresh graduates have been able to find a job in related areas. BY