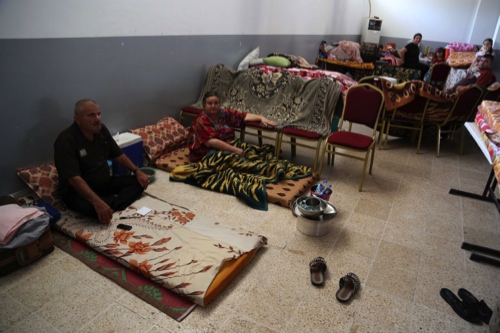 Displaced Iraqi Christians and Yazidis settle at the diocese of Zakho, 475 kilometers northwest of Baghdad

Islamic extremists shot scores of Yazidi men to death in Iraq, lining them up in small groups and opening fire with assault rifles before abducting their wives and children, according to an eyewitness, government officials and people who live in the area.
A Yazidi lawmaker on Saturday cited the mass killing in Kocho as evidence that his people are still at risk after a week of U.S. and Iraqi airstrikes on the militants.
Meanwhile, warplanes targeted insurgents around a large dam that was captured by the Islamic State extremist group earlier this month, nearby residents said.
In a statement, U.S. Central Command said the airstrikes Saturday were launched under the authority to support humanitarian efforts in Iraq, as well as to protect U.S. personnel and facilities.
Central Command says the nine airstrikes conducted so far had destroyed or damaged four armored personnel carriers, seven armed vehicles, two Humvees and an armored vehicle.
The U.S. began airstrikes against the Islamic State extremist group a week ago, in part to prevent the massacre of tens of thousands of Yazidis in northern Iraq.
Islamic State fighters had surrounded the nearby village 12 days ago and demanded that its Yazidi residents convert or die. On Friday afternoon, they moved in.
The militants told people to gather in a school, promising they would be allowed to leave Kocho after their details were recorded, said the eyewitness and the brother of the Kocho mayor, Nayef Jassem, who said he obtained his details from another witness.
The militants separated the men from the women and children under 12 years old. They took men and male teens away in groups of a few dozen each and shot them on the edge of the village, according to a wounded man who escaped by feigning death.
The fighters then walked among the bodies, using pistols to finish off anyone who appeared to still be alive, the 42-year-old man told The Associated Press by phone from an area where he was hiding. He spoke on condition of anonymity, fearing for his safety.
“They thought we were dead, and when they went away, we ran away. We hid in a valley until sundown, and then we fled to the mountains,” he said.
It was not clear precisely how many men were killed. Iraqi and Kurdish officials said at least 80 men were shot. Yazidi residents said they believed the number was higher, because there were at least 175 families in Kocho, and few were able to escape before the militants surrounded their hamlet. AP