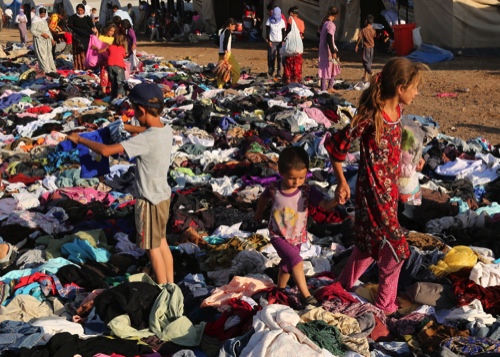 Far fewer refugees remain on Iraq’s Sinjar Mountain and a U.S.-led rescue mission is far less likely, U.S. officials said.
A team of U.S. military personnel assessed the situation and reported that only several thousand refuges are on the mountain and that they appear to be in relatively good condition, the Pentagon said in a statement yesterday. Tens of thousands had been reported on the mountain last week.
Defense Secretary Chuck Hagel credited airdrops of food and water for sustaining those on the mountain and airstrikes for pushing back Islamic State militants and allowing refugees to leave.
“As a result of that assessment, I think it’s most likely far less likely now that we would undertake any kind of specific humanitarian rescue mission that we have been planning,” Hagel told reporters as he returned to Washington from a world tour. “That doesn’t mean that we won’t.”
Iraq remains a troubled country, Hagel said, but he called the assessment of Sinjar Mountain a bit of good news. Of the U.S. effort in Iraq, he said: “It’s not over. It’s not complete.”
Attacks across Iraq’s north and west by the Islamic State group and its Sunni militant allies this summer have displaced members of the minority Christian and Yazidi religious communities and threatened neighboring Iraqi Kurds in the autonomous region.
Thousands of Yazidis on the mountain were able to leave each night over the last several days, Pentagon press secretary Rear Adm. John Kirby said in a statement.
The U.S. troops and U.S. Agency for International Development staff who conducted the assessment on Sinjar — fewer than 20 people overall — did not engage in combat operations and all returned safely to Irbil by military air, Kirby said.
“The Yazidis who remain are in better condition than previously believed and continue to have access to the food and water that we have dropped,” Kirby said. “Based on this assessment the interagency has determined that an evacuation mission is far less likely. Additionally, we will continue to provide humanitarian assistance as needed and will protect U.S. personnel and facilities.” AP