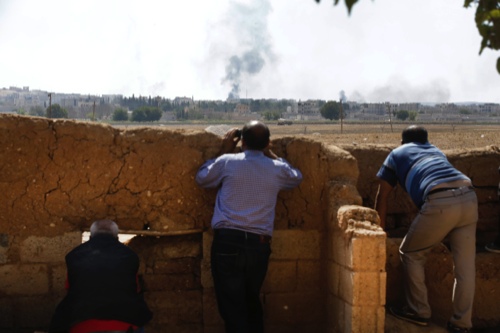 Turkish Kurds, standing in Mursitpinar, on the outskirts of Suruc on the Turkey-Syria border, watch over the border as the fighting intensifies between militants of the Islamic State group and Kurdish forces in Kobani, Syria

Several Syrian human rights groups called on the world to save the embattled Syrian Kurdish town of Kobani from falling into the hands of the Islamic State group as new U.S.-led airstrikes targeted the extremists near the town yesterday.
The strikes are part of a wave of U.S.-led coalition bombing this week that aims to prevent Islamic State fighters from capturing the town. An activist group said the strikes killed at least 45 militants since late Monday, forcing them to withdraw from parts of Kobani.
The dramatic appeal by human rights groups came after Islamic State fighters — despite the airstrikes — managed to push into parts of the town, located on the Syria-Turkish border and also known under its Arabic name of Ayn Arab.
Kobani has been under the onslaught of the Islamic State group since mid-September when the militants’ launched their offensive in the area, capturing several Kurdish villages around the town and bringing Syria’s civil war yet again to Turkey’s doorstep.
The fighting has forced some 200,000 of the town residents and villagers from the area to flee and seek shelter across the frontier in Turkey. Activists also say that more than 400 people have been killed in the fighting.
Around noon yesterday, warplanes believed to be of the U.S.-led coalition bombed positions of the Islamic State group near Kobani. One airstrike, visible from the border, hit a hill and an open space near the town.
The Britain-based Syrian Observatory for Human Rights said yesterday’s strikes targeted Islamic State fighters east of Kobani.
Since Monday night, the strikes killed 45 Islamic State fighters in and around Kobani, targeted 20 separate locations with the extremists and destroyed at least five of their vehicles, the Observatory said.
The airstrikes also forced Islamic State fighters to withdraw from several streets they had controlled earlier, added the Observatory, which tracks the Syrian conflict through a network of activists on the ground.
Meanwhile, an attack apparently carried out by Kurdish fighters inside the town destroyed a mosque minaret, which the Islamic State group had used as an outlook, activists said.
Heavy gunfire was heard from inside the town in a sign of fresh clashes yesterday. The Observatory said most of the fighting as in the town’s Kani Arban neighborhood.
In their appeal, seven rights groups — including the Kurdish Organization for Human Rights and the Human Rights Organization in Syria — said Islamic State fighters’ offensive on Kobani and their “inhuman practices and measures have taken a clear form of persecution and ethnic cleansing.”
The statement also said that the fighting over Kobani has displaced nearly 280,000 people who fled fearing “killings, executions, throat slitting, beheadings, mayhem and kidnaping of women and children.”
The Syrian human rights group also criticized Turkey, saying it was “preventing and hindering the entrance of Kurdish refugees fleeing Syria’s northern border from the brutality and terrorist acts” of the Islamic State group. Lefteris Pitarkis and Bassem Mroue, Mursitpinar , AP