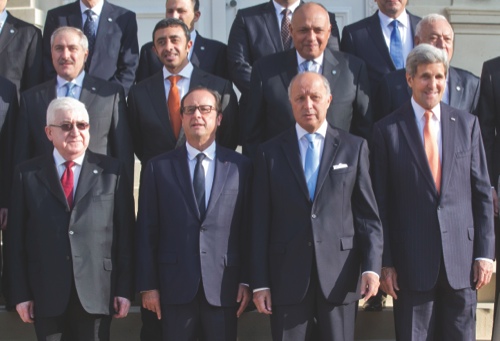 Newly outraged by the beheading of yet another Western hostage, diplomats from around the world are in Paris pressing for a coherent global strategy to combat extremists from the Islamic State group — minus two of the main players and without any ground troops — in a conflict that threatens to spill beyond the Mideast.
U.S. allies signaled their readiness to step up the fight against Islamic State under a coalition formed by President Barack Obama as the beheading of a British aid worker sparked further outrage.
While no Arab nations have publicly committed to military action, several have told the U.S. privately they are willing to join in airstrikes in Iraq and in Syria, said a U.S. State Department official who spoke on the condition of anonymity.
The U.S. intends to intensify airstrikes on the militants in coordination with the Iraqi government, according to a second State Department official who also spoke anonymously under government rules. Obama is considering extending the attacks, now limited to Iraq, to Islamic State bases, leaders and supply lines in neighboring Syria.
“It is a global threat so we need a global response,” French President Francois Hollande said as he opened the conference in Paris bringing together the European and Middle Eastern wings of the developing anti-Islamic State coalition.
Hollande said the response involved military support to Iraqi and Kurdish forces, political support for the new Iraqi government, humanitarian aid for displaced people, and stepped-up efforts to prevent the flow of fighters and money to the Islamic State.
The Paris talks take on increased urgency after a third foreign hostage, David Haines, was beheaded in an effort to force the U.K – a key member of the coalition – to abandon the fight against Islamic State.
The group threatens to kill another British hostage, who was identified Sunday as aid worker Alan Henning. The father of two, from Greater Manchester, was kidnapped at the end of last year after entering Syria from Turkey, The Bolton News, a British newspaper, reported on its website.
The 25-nation gathering in Paris is intended to coordinate aid to Iraq in the efforts against the Islamist militants. France invited foreign ministers from the five permanent members of the United Nations Security Council – the U.S., Britain, France, Russia, and China – along with European and Arab nations involved in implementing Obama’s strategy to degrade and destroy the Islamic State group.
Iran’s Supreme Leader Ayatollah Ali Khamenei, who wasn’t represented at the talks, said the coalition’s efforts are “pointless,” “superficial,” and driven by “an agenda.” France had wanted to invite Iranian officials to the talks, but the move was vetoed by the U.S., according to a French official who asked not to be named in line with government policy.
So far, the U.S. is the only foreign country carrying out airstrikes against the group in Iraq, and Obama has threatened to expand them to militant safe havens in Syria. During Hollande’s visit to Baghdad last week, Iraqi Prime Minister Haidar al-Abadi said he was told that France “will take part in striking terror locations.” France yesterday started reconnaissance flights from its airbase in Abu Dhabi, Defense Minister Jean-Yves Le Drian told pilots yesterday at the base. Terry Atlas and Gregory Viscusi, Bloomberg/AP