Italy to map out economic revival as travel ban ends 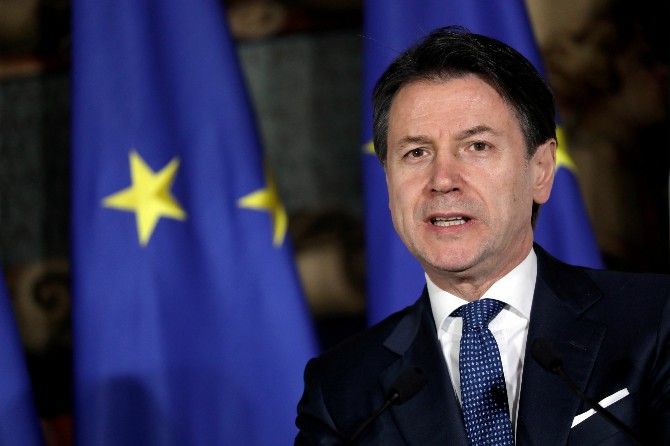 Prime Minister Giuseppe Conte will unveil his plan to rebuild a battered economy on the day Italians end almost three months of lockdown measures and can again travel freely.
The premier will outline his government’s recovery strategy in a speech late Wednesday, Italian media reported, and repeat an appeal to put aside the country’s political divisions.
Conte, who heads an unruly coalition, on Tuesday had called on Italians to come together and help revive their country, but his message was met by opposition rallies in hundreds of cities on Republic Day.
Giuseppe Conte, Italy’s prime minister, speaks during a joint news conference with Emmanuel Macron, France’s president, not pictured, at a bilateral summit in Naples, Italy, on Thursday, Feb. 27, 2020. Macron and Conte staged a show of friendship with a summit designed to turn the page on a postwar low in bilateral relations, even as coronavirus concerns overshadowed the meetings agenda.
The renewed appeal comes as new virus cases continue to decline and as Italians can again travel within the country without restrictions starting Wednesday.
Still, local differences are growing deeper, with officials from the substantially virus-free South threatening to turn away citizens from Lombardy, Italy’s richest and most populous region, where new cases continue to be reported.
Lines for reopened ferry service between Sicily and the Italian mainland began forming as early as 4 a.m. Wednesday, la Repubblica reported, with most of the traffic heading away from the island.
“Let’s combine and concentrate all our energy in the shared effort to pick ourselves up and begin again with maximum determination,” Conte said in a message posted Tuesday on Facebook, evoking efforts to rebuild the nation after World War II.
Conte’s finance minister, Roberto Gualtieri, was in the meantime engaged in a sniping war with the head of industry lobby Confindustria, Carlo Bonomi, who charged in an interview with Repubblica that some proposed policies could “do more damage than Covid.” Pumping resources to individuals would waste money, he said, while the country needs investments in areas like infrastructure in order to restart the economy.
The Health Ministry on Tuesday reported 55 fatalities, the fewest in more than a week. New cases rose by 318 to 233,515, with almost 60% of new infections in Lombardy. The region, which includes financial center Milan, accounts for almost half of the more than 33,500 fatalities nationwide and still has the highest ratio of new cases per 100,000 people.
The decision to open the country internally is also designed to help boost tourism, which accounts for about 13% of gross domestic product. Italy will now allow travelers from other European Union states to enter without undergoing quarantines.
Foreign Minister Luigi Di Maio is due to meet his French counterpart Jean-Yves Le Drian on Wednesday to hammer out details for cross-border travel between the two countries, daily La Stampa reported. Di Maio is also seeking French support in easing travel restrictions for Italians heading to other European destinations, including Greece, Stampa said.
Railway operator Ferrovie dello Stato is doubling the number of long-haul trains from June 3, with fewer seats to facilitate distancing. Struggling airline Alitalia is increasing flights by 36% this month, including a non-stop Rome-New York route.
Some restrictions remain in place. Schools won’t reopen before September, while cinemas and theaters will be allowed to operate again from mid-June.
Italy’s economy shrank 5.3% in the first quarter, the most since the current data series began in the mid-1990s. A deeper contraction is expected this quarter and the full-year slump is likely to exceed 10%, according to economists.
The recession, along with extra spending on health measures, has prompted additional government borrowing, adding to the nation’s already considerable debt pile.
Italy received over 100 billion euros ($112 billion) of bids for its syndicated offering of 10-year debt on Wednesday. The nation has to drastically ramp up bond sales in order to fund a growing fiscal deficit, with the country’s debt as a share of economic output set to top 150% this year. Tommaso Ebhardt & Jerrold Colten, Bloomberg