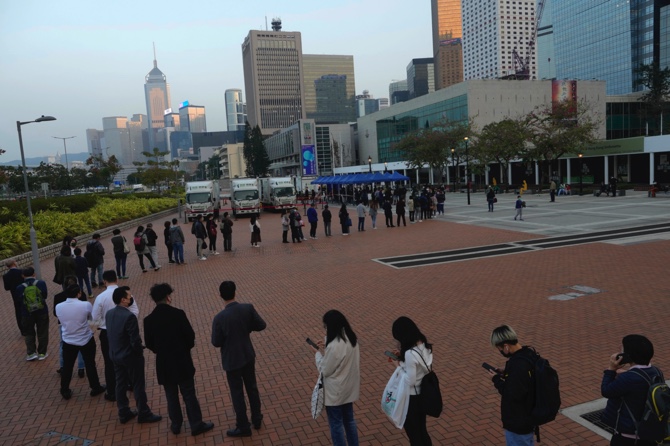 Residents line up against Hong Kong’s business district to get tested for the coronavirus at a temporary testing center for Covid-19, Friday

One of two people who attended a large gathering with senior Hong Kong officials and was believed to be infected with COVID-19 turned out to be a false positive, meaning about 80 of more than 180 attendees may no longer face a lengthy quarantine.

The birthday party at a restaurant on Monday evening has roiled officialdom, drawing a rebuke from city leader Carrie Lam who criticized about a dozen officials including the police chief and the home affairs secretary for setting a bad example as Hong Kong tries to limit the spread of the omicron variant.

Microbiologist Yuen Kwok-yung told reporters Saturday that a woman at the party who was a preliminary positive case tested negative in two subsequent tests and had no symptoms. He said the swab used for the initial test, which was conducted by a doctor who is the woman’s husband, may have been contaminated because he had vaccinated 13 other patients earlier.

Another guest who arrived at the party around 9:30 p.m. is a confirmed case, so about 100 people who were still at the restaurant face 21 days’ quarantine, according to Hong Kong media reports. About 80 who left earlier will be spared, the South China Morning Post newspaper said.

More than 180 people were at the party, Hong Kong Health Secretary Sophia Chan said Saturday, up from an estimate of 170 the previous day. Health officials had said Friday that all would be quarantined if the woman, who was at the party earlier in the evening, was confirmed to be infected.