Jackson Chang | IPIM president: ‘Macau can serve as an ideal platform for investors’ 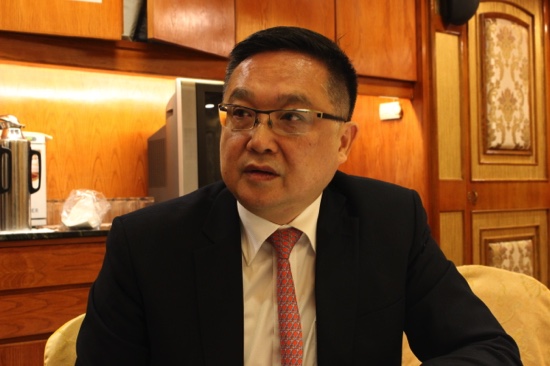 The Macau Trade and Investment Promotion Institute (IPIM) aims to promote
external trade and attract investment to Macau. In an MDT/Macauhub exclusive interview, IPIM’s president Jackson Chang stresses the development of the local MICE industry and the need to enhance the region’s role as a trade platform between China and the Portuguese-speaking countries.

– Do you think that more should be done in the Pearl River Delta to put SMEs in contact with other companies in the region?
Jackson Chang (JC) – Guangdong and Macau are situated on the Pearl River Delta, with a population of around 55 million between them. The area is a major economic hub and one of China’s most affluent regions. In recent years, the two places have been co-operating closely in a variety of areas. (…) IPIM has established co-operation with Guangdong trade and investment departments in organizing business delegations on visits overseas and hosting numerous business exchange activities in Macau and Guangdong as well as overseas.

– One of the most important aspects of promoting businesses is to create a platform for entrepreneurs to meet. Do you plan to increase the awareness of Chinese investors in Portuguese-speaking countries (PSC)  to create a better understanding of China’s potential and the role of Macao as a platform for their businesses?
JC – Since the 4th Ministerial Conference of the Forum Macau in November 2013, Macau’s role as a Commercial and Trade Service Platform between China and PSCs has been further enhanced. The “Three Centers” – “a commercial and trade service center for SMEs between China and PSCs”, “a food product distribution center for PSCs” and “a center for conventions and exhibitions for economic and trade co-operation between China and PSCs” – are also being set up. One of the projects under the “Three Centers” is the Economic & Trade Co-operation and Human Resources Portal between China and PSCs, a tool for economic and trade co-operation between China and PSCs. It provides information including: a database of bilingual professionals fluent in Chinese and Portuguese; economic and trade data; and information on food products from PSCs. (…) At present, there are over 620 registered users on the Portal and the PSCs food database showcases around 1,300 food products from Angola, Brazil, Cape Verde, East Timor, Guinea Bissau, Mozambique and Portugal. Since its launch in April 2015, the portal has received over 49,000 visits. We have also been carrying out a lot of promotion in Macau, mainland and overseas, with the hope of increasing the usage and penetration of the Portal. Through online and offline support, we hope to encourage more collaboration between Chinese and PSCs enterprises, especially through Macau as a platform. 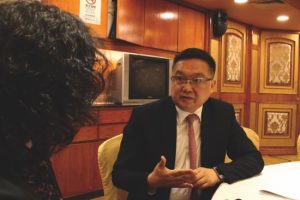 – China’s strategy of the “One Belt One Road” has been a hot topic in Macau. Everyone has said that Macau can participate in it, but so far we haven’t seen any concrete plans. Diplomats from China and the PSCs have said that this “Belt and Road” initiative should be extended to the PSCs in Asia, Africa and Europe. The previous ambassador of China in Portugal even said that the road should end in Lisbon. What do you think? Should this grand plan include the PSCs?
JC – Due to its special geographic location and its role as an economic and trade co-operation platform for China and Portuguese-speaking countries, Macau possesses unique advantages in the implementation of the “Belt and Road” initiative. The “One Belt One Road” initiative is an inclusive project open to all countries. As mainland China strengthens its economic and trade connections with countries along the Silk Road Economic Belt and the 21st Century Maritime Silk Road, Macau strives to make full play of its strength, to be in line with the “Belt and Road” initiative. In particular, it has its role as a trade and economic co-operation service platform between China and PSCs, to strengthen trade and economic partnerships with ASEAN countries, and further assist mainland enterprises to go global and tap the PSCs markets: in addition, enhance collaboration in the Pearl River Delta region and the development of the Guangdong–Hong Kong-Macau Big Bay Area by means of different degrees of participation, creating a more desirable environment and exploration of business opportunities.

– Often it seems that IPIM and the Macau Forum are doing the same job. Could you explain their complementary roles?
JC – IPIM works mainly to improve co-operation with the PSCs in the areas of trade, investment and enterprises, with the aim of consolidating Macau’s role as a trade and economic co-operation service platform between China and PSCs.  We have also put a lot of effort into promoting and advertising the “Three Centers”. What is worth mentioning is that a specific department dedicated to promoting trade and investment co-operation with PSCs will be set up within IPIM this year.

– Has the Macau Product Display Centre that IPIM set up some years ago brought any results to the diversification of the economy and promotion of local products in China and the PSCs?
JC – The government established “Macau Ideas” – the products display center – in May 2011 and entrusted its management to IPIM. The objective of “Macau Ideas” is to create brand awareness of local products; it serves as a platform specializing in the promotion of “Made in Macau” products, “Macau Brands”, “Macau Designs” and “Food products from PSCs with distribution channels in Macau”. Since its inception, “Macau Ideas” has received approximately 73,000 visitors. Over the past four years, many local enterprises have seized new business opportunities after showcasing their products in “Macau Ideas”, and expanded their scope of business. For example, a souvenir manufacturer received more purchase orders; a Portuguese pastry maker entered into a long-term contract as a supplier to several food souvenir shops; a design and manufacturer of leather goods enjoyed an increase in business turnover and brand awareness for its products after showcasing their products in “Macau Ideas.”

– If you are an investor and want to come to Macau looking to invest with an eye on southern China, what is IPIM’s advice in terms of areas of business that could be successful, especially now that diversity of the economy is a major issue?
JC – Macau is working towards becoming a World Tourism and Leisure Centre and promoting moderate economic diversification. Currently, the city is speeding up the development of its convention and exhibition, Traditional Chinese Medicine, cultural and creative industries, as well as commercial and trade services. In 2014, revenue from non-gaming sectors including wholesale, retail, hotels, food and beverages, construction and finance reached 190 billion patacas (around USD24 billion), while gaming revenue stood at 360 billion patacas (around USD45 billion).
The completion of various large tourism, entertainment and resort facilities have also accelerated the development of related industries such as hotels, conventions and exhibitions, retail, food and beverage. They have provided new opportunities for other emerging sectors including environmental, cultural and creative industries. With its fast growing service sector supported by a strong tourism industry, Macau can serve as an ideal platform for investors to make greater inroads into the mainland market.

– Do you believe that the new area of Hengqin can be a good space for the diversity of the economy?
JC – Macau and Guangdong are currently working on numerous projects according to “The Framework Agreement of Guangdong-Macau Co-operation” including the construction of the Co-operation Industrial Park on Zhuhai’s Hengqin Island, which will create valuable opportunities for business collaboration in areas of leisure tourism, convention and exhibition, cultural and creative industries, Chinese medicine as well as other sectors.
In April 2014, the government recommended 33 investment projects submitted by local enterprises wishing to operate in the 4.5 square-kilometer “Guangdong-Macau Co-operation Industrial Park”, to the Zhuhai authorities. Until now, 19 projects have been signed and the land has been supplied.
Meanwhile, the China (Guangdong) Pilot Free Trade Zone Hengqin Area was officially launched on 23 April 2015. The policies for the FTZ create an international, market-orientated and legal business environment, further abolishing barriers for investors’ wishing to enter the market and actively promoting financial innovation cooperation. It will help Macau and PSC businesses to expand in all areas and help with the city’s moderate economic diversification. Together with the completion of several major infrastructure projects such as the Hong Kong – Zhuhai – Macau Bridge, which will be completed in 2016, it will further open up new business and co-operation opportunities to investors from the mainland, Macau and PSCs.
MDT/Macauhub exclusive