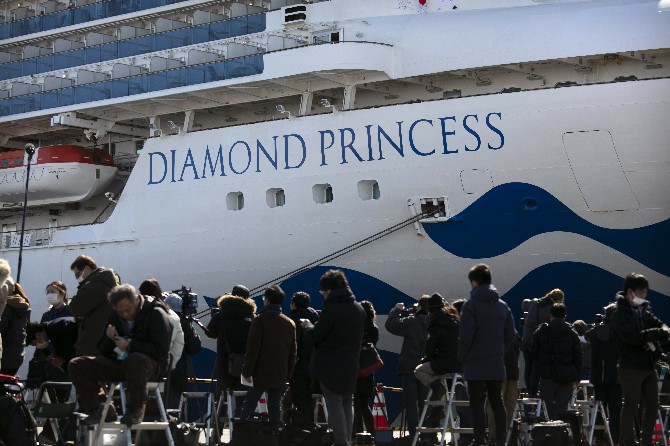 Thirty-nine new cases of the coronavirus have been confirmed aboard a cruise ship quarantined at a Japanese port, on which five Macau residents are being held. The update brings the total cases on the Yokohama-harbored Diamond Princess to 174.
In response to the new cases, Macau authorities said during yesterday’s daily press conference that the five Macau residents aboard the cruise ship are “in a stable condition.”
According to the latest information, there is no record of the five Macau residents having contracted the virus. Macau’s Tourism Crisis Management Office informed the Times that the residents are being provided with information and assistance as necessary.
The U.S.-operated Diamond Princess had completed a 14-day tour, during which it stopped at Hong Kong and several other Asian ports before returning to Japan. An 80-year-old man who disembarked in Hong Kong tested positive for the virus, prompting Hong Kong to notify the ship and Japanese authorities, who then ordered the quarantine and testing.
Concerns over the virus have led to the rerouting and cancellation of other cruises. The Westerdam cruise ship carrying 2,257 passengers and crew is now in the Gulf of Thailand with nowhere to dock after being refused entry in Japan, Taiwan, the Philippines and Thailand. There are no confirmed cases of the virus on board, but it stopped in Hong Kong less than two weeks ago, which is within the incubation period of the virus. DB/AP