Japan fires back at Ghosn, stoking war of words over trial 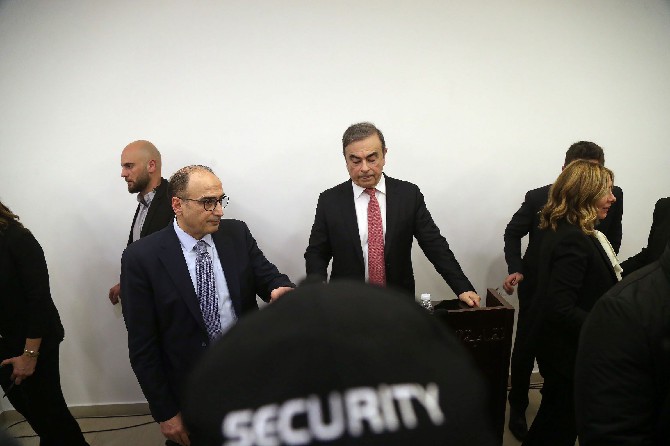 Japan battled to restore its image yesterday after former auto executive Carlos Ghosn blasted the country’s legal system in a marathon press conference following his escape to Lebanon.
Justice Minister Masako Mori held an unusual briefing in the early morning hours in Tokyo, and then gave a second press conference later on to rebut what she said were mostly “abstract, unclear or baseless” criticisms of the country’s legal system. She was scathing in her descriptions of Ghosn’s behavior after he told the world he skipped bail and fled Japan because he didn’t think he would get a fair trial.
“He has been propagating both within Japan and internationally false information on Japan’s legal system and its practice,” Mori said in her first briefing. “That is absolutely intolerable.”
Ghosn, the former head of Nissan Motor Co. and Renault SA, used the first press conference since his dramatic escape to blast what he called “hostage justice.” Speaking in four languages, he offered a point-by-point rebuttal of the charges against him and accused Japanese prosecutors, government officials and Nissan executives of conspiring to topple him to prevent a further integration of the Japanese carmaker with Renault.
In response to Ghosn’s assertion that Japan breached his human rights by preventing him from seeing his wife, Mori said such measures were only used in cases of a flight risk or when there was a danger of evidence being concealed or destroyed. Mori also lauded Japan’s police, judges and prosecutors for building what she said was the “safest country in the world.”
Mori said she was aware of criticism of Japan’s criminal justice system, and said authorities are taking steps to improve it. “It is my strong hope that he engage in all possible efforts to make his case within Japan’s fair criminal justice proceedings, and that he seek justice rendered by a Japanese court,“ Mori said.
The Tokyo District Public Prosecutors Office, which rarely makes any public comment, posted an English statement on its website saying Ghosn had only himself to blame for his strict bail conditions. It vowed to try to bring him to justice in Japan. At a regular scheduled briefing yesterday, Tokyo Deputy Chief Prosecutor Takahiro Saito pushed back against many of Ghosn’s complaints about the “inhumane” conditions of his confinement.
“Ghosn gave the impression he was questioned for a total of eight hours a day, but that’s not true,” Saito said. The former CEO was questioned on 70 of the days he spent in jail, about half the total, with each session lasting an average of four hours, he said. He met with his legal counsel “almost every day” he was there, altogether more than 120 times, Saito said.
Chief Cabinet Secretary Yoshihide Suga also piled in, calling Ghosn’s comments one-sided and not persuasive.
Striking Back
At his news conference in Beirut, Ghosn refrained from accusing specific people in the Japanese government of any wrongdoing, citing the need to avoid creating friction between Lebanon and Japan. He also said he didn’t think Prime Minister Shinzo Abe was involved.
Abe has avoided making any public comments about Ghosn. Kyodo News reported on Wednesday that he told a party lawmaker at a dinner in Tokyo ahead of Ghosn’s news conference that he had wanted the situation “to be sorted out within Nissan in the first place.”
The head of a foreign policy panel in Abe’s ruling Liberal Democratic Party accused Ghosn of spreading “fake news.”
“We have our dignity as a country, and we need to have people understand that we have a proper legal system that doesn’t ignore human rights at all,” said Yasuhide Nakayama, who is also a former vice foreign minister.
Abe’s government has sought cooperation from Lebanon to bring Ghosn back but Japan doesn’t have an extradition treaty with the country. Lebanese President Michel Aoun pledged to work on the issue in a meeting Tuesday with Japan’s ambassador in Beirut, the Japanese foreign ministry said in a statement.
Lebanon prosecutor Ghassan Oueidat will listen to Ghosn’s testimony on yesterday after Japan asked Interpol, the international police organization, to issue a Red Notice, Lebanese state-run National News Agency said. Ghosn said at the briefing that he wanted to clear his name and would stand trial “in any country where I believe I can receive a fair trial.” Tsuyoshi Inajima & Isabel Reynolds, Bloomberg