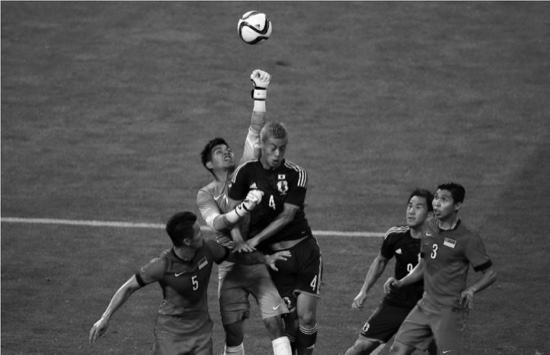 Japan’s Keisuke Honda, center right, and Singapore’s goalkeeper Mohamad Izwan Bin Mahbud, center left, vie for the ball during their second round soccer match of regional qualifiers for the 2018 World Cup, in Saitama, north of Tokyo

Japan was held to a goalless draw by visiting minnow Singapore while Guam pulled off only its second World Cup qualifying win when it beat India 2-1 yesterday.
Also, Son Heung-min confirmed his status as one of the biggest stars in Asian football by inspiring South Korea to a 2-0 win over Myanmar in Bangkok.
Japan dominated at Saitama Stadium but couldn’t find a way to beat Singapore goalkeeper Izwan Bin Mahbud, who produced spectacular saves.
One of Bin Mahbud’s best saves was when he swatted away Shinji Okazaki’s header just before it crossed the line, 10 minutes after halftime.
Moments later, the Singapore ‘keeper dived to his left to get a hand on a Keisuke Honda header.
Honda had another golden opportunity when his free kick from 25 meters hit the post in the 72nd.
Singapore, which is 154th in the world rankings, leads Asia Group E early with four points. Japan, bidding for its sixth straight World Cup berth, has one.
Guam’s first successful qualifier was last week, against Turkmenistan 1-0.
Yesterday, Brandon McDonald put host Guam ahead of India in the 38th minute in Tamuning, and Travis Nicklaw doubled the advantage in the 62nd. Sunil Chhetri pulled one back for the visitors in stoppage time but India was handed its second defeat.
Turkmenistan held Iran to 1-1 in Tashkent in the other Group D match.
Serdar Azmoun put Iran ahead after four minutes, cutting in from the left flank and slotting the ball past goalkeeper Nikita Gorbunov, but Turkmenistan leveled in first-half stoppage time against the run of play when Ruslan Mingazov scored.
Iran laid siege to the Turkmen goal in the second half but was foiled by acrobatic saves from Gorbunov.
In Bangkok, where Myanmar was ordered to host South Korea following recent crowd violence in Yangon, a corner by Son was headed home by Lee Jae-sung 10 minutes before the break, then Son fired home a long-range free kick in the second half to seal a comfortable win.
Myanmar rarely threatened a South Korea which sits on top of Group G after one game.
“If you look at the scoreline then you may think there was not a big difference between the teams,” South Korea coach Uli Stielike said. “However, we dominated possession and had few problems at the back. We only had difficulties in attack, as we missed lots of chances and our passing was not what it should have been.”
Afghanistan rebounded from a 6-0 hiding from Syria by edging Cambodia 1-0 with a goal in the 86th minute from Mustafa Zazai in Phnom Penh in Group E.
North Korea scored four first-half goals en route to a 4-2 win over Uzbekistan to top Group H with its second win. Uzbekistan got late goals from Igor Sergeev and Sardor Rashidov but remained winless.
Omar Abdulrahman scored with 10 minutes to go for United Arab Emirates to beat East Timor 1-0, and lead Group A.
Bangladesh and Tajikistan got their first points in Group B with a 1-1 draw at Dhaka. Jahid Hasan opened the scoring for Bangladesh in the 50th, but Fatkhullo Fatkhuloev netted the equalizer two minutes from fulltime.
Thailand moved on top of Group F with its second victory as Teerasil Dangda scored both first-half goals in 2-0 win over Taiwan. AP