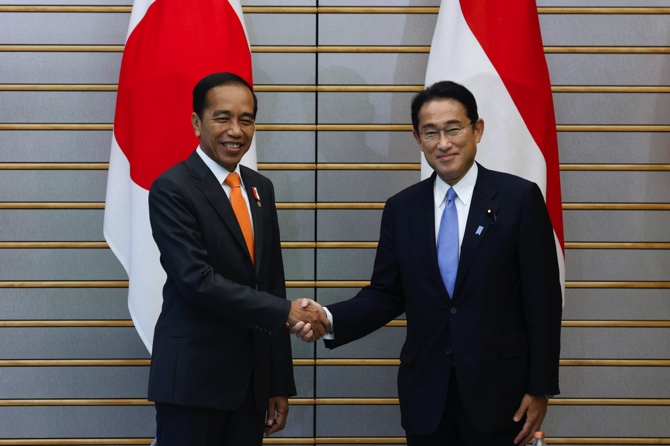 The leaders of Japan and Indonesia agreed yesterday to bolster their ties in maritime security and their cooperation on climate change, energy and investment between the Asian archipelago nations.

Widodo’s Japan visit follows his trip to China, where he met with Chinese President Xi Jinping and formally invited him to the Group of 20 summit in Bali in the fall. The two leaders on Tuesday also discussed issues ranging from trade to maritime cooperation.

While Indonesia and China enjoy generally positive ties, Jakarta has expressed concern about Chinese encroachment on its exclusive economic zone in the South China Sea, which China claims virtually in its entirety.

“In particular, I invite Japan to support the acceleration of Indonesia’s net zero emission target through advocating innovative technologies such as hydrogen and ammonia technology,” he said.

Japan is promoting mixing hydrogen and ammonia at coal-fired power plants as a way to lower emissions.

Also, Kishida said Japan is researching whether it can provide Japanese patrol vessels for Indonesia to build its maritime capabilities.

Japan’s Ground Self-Defense Force is participating for the first time in the Garuda Shield multilateral training exercise hosted by Indonesia next month, Kishida said. The U.S. is also joining the exercise.

While Japan promotes a “free and open” Indo-Pacific vision of security and trade with the United States and other democracies and friendly nations in the region that share concern about China’s increasing assertiveness, the two leaders did not mention the country by name.