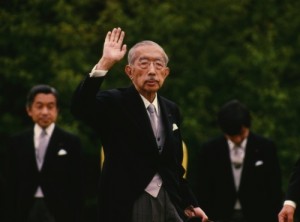 Japan’s Imperial Household Agency has compiled a 61-volume biography of former Emperor Hirohito that portrays him as being distressed that he could not stop his country from going to war, according to Japan’s Kyodo News agency.
The 12,000-page record says he complained in July 1939 to Army Minister Seishiro Itagaki about the military’s “predisposition” as it strengthened its relationship with Germany, Kyodo reported. He also warned against the navy’s call for war with the United States, predicting in July 1941 that it would be “nothing less than a self-destructive war.”
The record also cites U.S. Gen. Douglas MacArthur, who led America’s postwar occupation of Japan, as saying Hirohito had said he accepted full responsibility for the war.
Hirohito’s role in World War II was never firmly established, as he was shielded from indictment in the Tokyo war crimes trials by a U.S. occupation that wanted to use him as a symbol to rebuild Japan. He died in 1989 after 62 years on the throne.
An advance copy of the report was made available to some Japanese media, but the Imperial Household Agency turned down requests from The Associated Press for a copy. It is to be published in stages over five years beginning next March.
The project began in 1990 and cost 200 million yen (USD1.9 million). Kyodo said it provides little new material and is unlikely to change current thinking about Hirohito. It does make public some letters and essays he wrote as a child.
The record confirms that Hirohito said in 1988 that he had stopped visiting the controversial Yasukuni Shrine because it had added Class A war criminals to those enshrined there, Kyodo said. His last visit to Yasukuni was in 1975. Japanese Prime Minister Shinzo Abe visited the shrine last December, sparking official protests from China and South Korea. AP