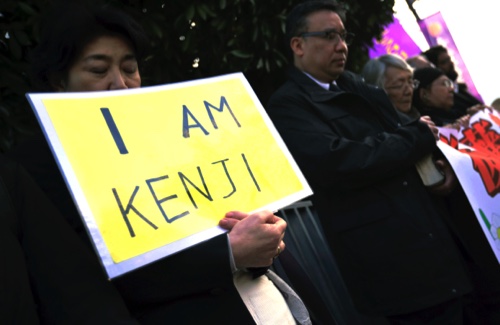 The plight of freelance journalist Kenji Goto, taken captive by Islamic State group militants, has gripped Japan, and the people’s hopes for his safety are now on Facebook with a simple, unifying plea: “I am Kenji.”
The video, posted online last week, showing Goto and another Japanese hostage, has dominated mainstream media here, a peaceful and relatively crime-free nation unaccustomed to such violence.
But as government officials made stately pronouncements on TV news, regular people were taking action of their own — online, with some rallying to Goto’s support and others mocking the terrorists with images — in a quiet but massive show of defiance.
“We want Kenji to come home,” said Taku Nishimae, a Japanese filmmaker living in New York, who started the “I am Kenji” Facebook page, right after seeing last week’s video demanding Japan pay USD200 million within 72 hours for the hostages’ release.
The page, now with more than 25,000 “likes” and growing, asks people to post self-portraits and other photos with a sign that says: “I am Kenji.”
It’s a reference to the “Je Suis Charlie,” or “I Am Charlie,” worldwide slogan showing solidarity with Charlie Hebdo, the Paris weekly newspaper where 12 people were killed in a terrorist attack earlier this month.
“Let’s show that we’re united, and tell that it’s unjust to kill innocent citizens and it’s meaningless to turn entire nation against you,” the Facebook page says in English, followed by a translation in Japanese.
Nishimae, 52, stressed the page is not about taking political sides, or even about freedom of the press, but a more general human statement, like a desperate prayer.
About a thousand people have posted photos, some of them portraits holding handwritten messages, some identifying themselves as Muslim, but all with the same message.
The slogan has taken off. “I am Kenji” was among the signs held up at a demonstration of about 1,000 people outside the prime minister’s office over the weekend, demanding the government do more to save the hostages.
“It’s great people are getting inspired,” said Nishimae, who has known Goto, 47, for 12 years and has worked with him on documentary movies. “Even now, I can’t believe it. But it is Kenji. It feels so unreal.”
They had hit it off right away, he recalled. Goto devoted his life to telling the stories of refugees and children in war zones, and had worked with UNICEF.
Another video over the weekend, whose authenticity could not be confirmed, appeared to show Goto holding a photo of the body of Haruna Yukawa, the other hostage, with the demand changing to a prisoner exchange. Japanese Prime Minister Shinzo Abe has said that video is likely credible.
Over the last week, Japanese Twitter has seen a stream of doctored images taken from the first video, including cutesy manga-like figures juxtaposed on top of the images of the two kneeling hostages as well as the masked man standing in the middle.
Nobuyuki Hayashi, a consultant and technology journalist, who happened to know Goto in junior high school, says he finds Twitter chatter disturbing, because of the anonymity that allows people to voice irresponsible and sometimes hurtful views.
“We needed to avoid these Japanese netizens cloaked under anonymity to make any constructive discussion,” Hayashi said.
Many Japanese are worried for Goto, but don’t know what to do and feel frustrated, he said. The Facebook page allowed them to do something. They can also see the concerns of others around the world.
“And that is encouraging,” Hayashi said. “And we can all hope that, when Kenji returns to Japan sometime soon, he would be happy to see so many people supporting him.” Yuri Kageyama, Business Writer, Tokyo , AP