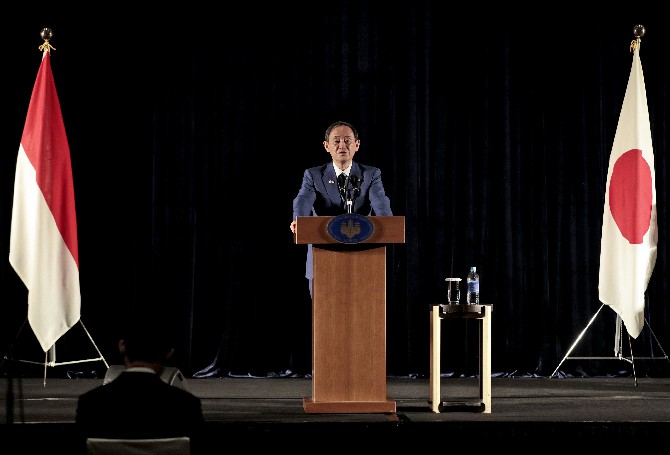 Japan’s new prime minister pledged yesterday to help Southeast Asian nations increase their maritime security capabilities, as he used his first overseas trip as leader to push his country’s vision for greater international cooperation to counter China’s influence in the region.
Prime Minister Yoshihide Suga, speaking in the Indonesian capital, also took a thinly veiled dig at China’s activities in the disputed South China Sea, where it has built and militarized manmade islands and is pressing its claim to virtually all of the sea’s key fisheries and waterways.
A number of Southeast Asian nations dispute China’s claims to the waters.
“In the Indo-Pacific that connects maritime transport between Japan and ASEAN, we can achieve the peace and prosperity only by fully implementing rule of law that allows anyone freedom and openness,” Suga told a news conference in Jakarta. ASEAN is the 11-country Association of Southeast Asian Nations.
“But in the South China Sea, opposite actions are being taken and we are closely watching with grave concern,” Suga said. “Japan opposes to any action that would increase tensions in the South China Sea.”
Suga reiterated that all parties involved in the South China Sea disputes must make peaceful efforts toward resolution, not by force or threat.
Suga pledged to strengthen bilateral defense ties with Southeast Asian nations and promised further assistance to step up their maritime policing, including training and equipment transfer from the Japanese Coast Guard.
Suga was wrapping up his visit to Indonesia, the second leg of his four-day tour that started from Vietnam. Suga chose Vietnam and Indonesia for his first overseas trip since succeeding Shinzo Abe as prime minister last month in order to demonstrate the region’s importance to Japan.
Japan considers China’s growing military activity to be a security threat and its defense papers have accused China of unilaterally changing the status quo in the South China Sea with its actions there. Japan is also concerned about China’s claim to the Japanese-controlled Senkaku Islands, called Diaoyu in China, in the East China Sea.
In both Indonesia and Vietnam, Suga has stressed that Southeast Asian countries are key to achieving what Japan terms a “Free and Open Indo-Pacific,” a vision of economic and security cooperation between nations that was started by Abe as a way to counter China’s growing might and influence.
Suga denied China’s criticism that the initiative is an attempt to create a NATO in Asia.
“Achieving a rule-based free and open Indo-Pacific in this region contributes to the peace and prosperity for the entire world,” Suga said. The plan is not intended for special membership but “we can cooperate with any country that shares the view,” he added.
Suga agreed with Indonesian President Joko Widodo to work toward holding a fresh round of foreign and defense ministerial talks and to speed up ongoing negotiations for defense equipment and technology transfer. Suga signed a defense equipment export agreement with Vietnam on that leg of his trip.
Japan has defense equipment transfer deals with 11 other countries, including the U.S., Britain, the Philippines and Malaysia, and is negotiating with Thailand.
Japan eased its arms exports ban in 2014 and has since been promoting exports of defense equipment. NINIEK KARMINI & MARI YAMAGUCHI, JAKARTA, AP