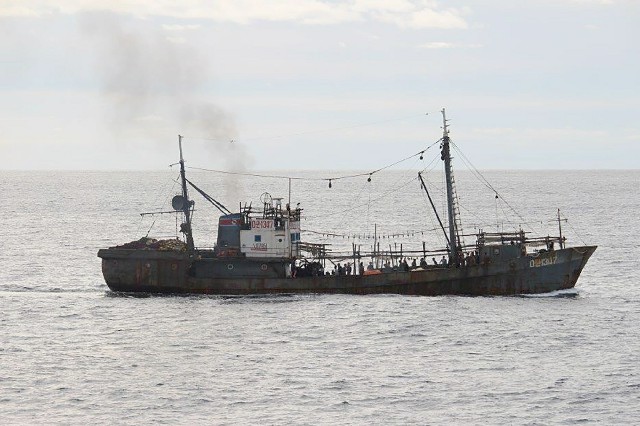 Japanese Prime Minister Shinzo Abe said yesterday that Tokyo has lodged a protest with Pyongyang over a collision between a North Korean fishing boat that illegally entered Japan’s exclusive economic zone and a Japanese patrol boat, pledging to step up measures against foreign poachers.
Japanese authorities on Monday rescued about 60 North Korean fishermen who were thrown to the sea after their ship collided with a Japanese Fisheries Agency inspection vessel and sank in Japan’s exclusive economic zone off the country’s northern coast.
Abe told parliament on yesterday that the authorities helped the fishermen onto another North Korean ship and let them go rather than arrest them for criminal investigation due to lack of evidence showing illegal fishing.
But Abe said that doesn’t mean Japan is looking the other way.
“The government of Japan will continue to respond resolutely to prevent illegal operations by foreign fishing boats inside of our exclusive economic zone,” he said, adding that Tokyo protested to Pyongyang via a diplomatic channel in Beijing.
Japan and North Korea have no diplomatic ties. The two countries have disputes over Japan’s 1910-1945 colonial rule of the Korean Peninsula, as well as North Korea’s nuclear and missile development and its abduction of Japanese citizens in the 1970s and 1980s. Abe has been pushing for his first summit with North Korean leader Kim Jong Un to resolve the abduction issue.
Japan’s exclusive economic zone, or EEZ, is a 200-mile (322-kilometer) zone where it has the right to all resources, from fish to natural gas.
The site of Monday’s collision, near an area known as a rich ground for squid fishing, has been crowded with North Korean poachers in recent years. Experts say the increase is due to Pyongyang’s campaign to boost fish harvests.
“It makes me angry when I imagine the Japanese fishermen’s concerns,” said Minister of Agriculture, Forestry and Fisheries Taku Eto, referring to the North Korean ship’s entry into the EEZ on Monday.
The Japanese Fisheries Agency’s patrol ship returned to a nearby port yesterday for inspection. Television footage showed no major external damage to the ship except for some scratches on its bow, though it was not immediately known if they were caused by the collision.
Coast guard officials were expected to ask the patrol ship’s captain and crew members to provide details of how the collision occurred. Mari Yamaguchi, Tokyo, AP