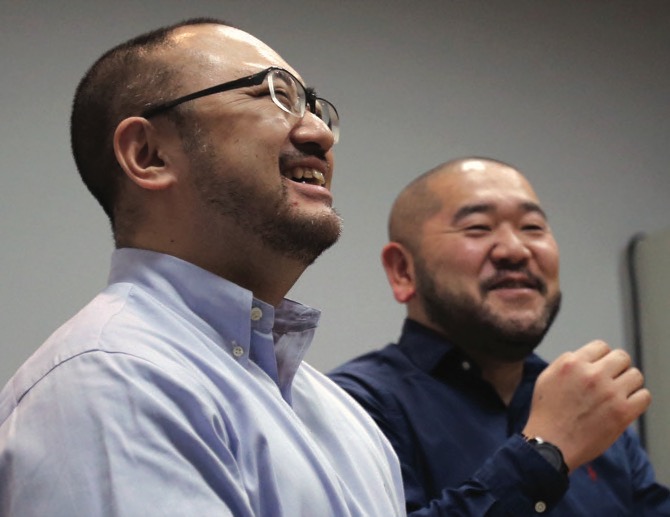 Six couples holding banners saying “Marriage For All Japan” walked into Tokyo District Court to file their cases against the government, with similar cases filed by three couples in Osaka, one couple in Nagoya and three couples in Sapporo.

Plaintiff Kenji Aiba, standing next to his partner Ken Kozumi, told reporters he would “fight this war together with sexual minorities all around Japan.”

Aiba and Kozumi have held onto a marriage certificate they signed at their wedding party in 2013, anticipating Japan would emulate other advanced nations and legalize same-sex unions.

That day has yet to come, and legally they are just friends even though they’ve lived as a married couple for more than five years. So they decided to act rather than waiting.

“Right now we are both in good health and able to work, but what if either of us has an accident or becomes ill? We are not allowed to be each other’s guarantors for medical treatment, or to be each other’s heir,” Kozumi, a 45-year-old office worker, said in a recent interview with his partner Aiba, 40. “Progress in Japan has been too slow.”

Ten Japanese municipalities have enacted “partnership” ordinances for same-sex couples to make it easier for them to rent apartments together, among other things, but they are not legally binding. Japanese laws are currently interpreted as allowing marriage only between a man and a woman.

In a society where pressure for conformity is strong, many gay people hide their sexuality, fearing prejudice at home, school or work. The obstacles are even higher for transgender people in the highly gender-specific society. The Supreme Court last month upheld a law that effectively requires transgender people to be sterilized before they can have their gender changed on official documents.

The LGBT equal rights movement has lagged behind in Japan because people who are silently not conforming to conventional notions of sexuality have been so marginalized that the issue hasn’t been considered a human rights problem, experts say. AP