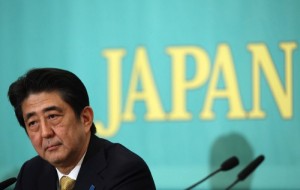 An unpopular law granting Japan’s government wider powers to declare state secrets came into effect yesterday as the country’s election campaign draws to a close, potentially giving Prime Minister Shinzo Abe greater leeway to control the media.
Under the act, people can be jailed for as long as 10 years for leaking state-designated secrets on matters from foreign affairs to defense and counter-terrorism. While the government says the law will help Japan share information with other nations including military ally the U.S., legal and newspaper groups say it is vague and may suppress press freedom.
Approved 12 months ago by parliament, the legislation is part of Abe’s push to strengthen the nation’s defense in the face of China’s assertiveness. Even as the law is unpopular with the public – alongside his security and nuclear-restart policies – it’s unlikely to sway voters in an economy-focused election on Dec. 14 that Abe’s ruling Liberal Democratic Party is projected to win.
“The secrets law is aimed at agents, terrorists and spies, and isn’t related to ordinary people,” Abe said on TBS TV last month, adding he would step down should the law be used to control the media or film-making.
The measure led the opposition to call a no-confidence vote in Abe’s government when the Diet approved it last December. A student group was set to protest the law outside the prime minister’s official residence yesterday.
The law takes effect just as Abe appears to be seeking greater influence over the nation’s media, according to Koichi Nakano, a professor of political science at Sophia University in Tokyo.
“The definition of secret is very vague, and people including myself, are wary of misuse,” said Kaori Hayashi, a professor at Tokyo University’s Graduate School of Interdisciplinary Information Studies.
The LDP sent a letter to Japan’s five biggest broadcasters last month to demand unbiased reporting of the election. Abe has criticized the Asahi newspaper, saying its coverage of Japan’s rounding up of women to serve in wartime brothels has damaged the country’s reputation.
Abe told reporters on Dec. 1 he didn’t order the party to send the letter, though he hoped the election would be covered “fairly and impartially.”
The Japanese Federation of Bar Associations said on its website the new act carries the danger of arbitrary designation of secrets. In a Dec. 8 statement, the Japan Newspaper Publishers and Editors Association said the maximum sentence for leaks was too harsh and could damage reporting activities and the public’s “right to know.”
Chief Cabinet Secretary Yoshihide Suga said Tuesday that the government will strive to safeguard the public interest. “We’ll make proper efforts to gain the understanding of the people on this law,” he told reporters.
About 58 percent of respondents to a Kyodo News survey published Dec. 1 said the act should be revised or abolished, while 39 percent said it should either be left as-is or made even stronger.
After the passage of the bill last year, Japan fell six places to 59th out of 180 nations in Reporters Without Borders’ 2014 World Press Freedom Index, leaving it behind such nations as Serbia and Botswana.
“Investigative journalism, public interest and the confidentiality of journalists’ sources are all being sacrificed by legislators bent on ensuring that their country’s image is spared embarrassing revelations,” the group said. Andy Sharp and Maiko Takahashi, Bloomberg