Japan welcomes US trade pact, but automakers appeal for help 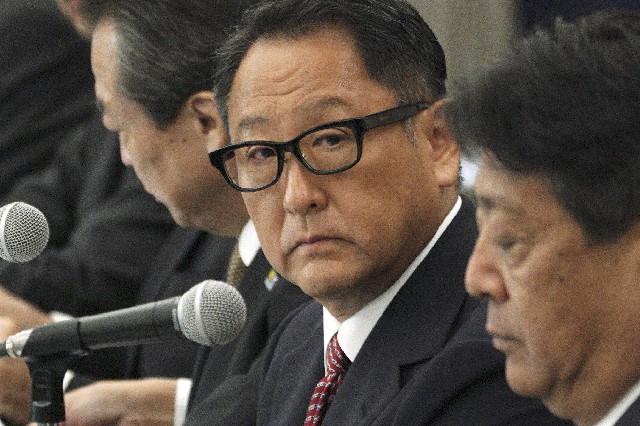 Japanese automakers yesterday urged the government to do more to support the industry after their government signed a trade deal with the U.S. that kept auto tariffs unchanged.
Japan’s Prime Minister Shinzo Abe and President Donald Trump, both attending the U.N. General Assembly in New York, signed a trade agreement covering agricultural, industrial and digital trade.
The Japanese auto industry has been a main target of criticism from Trump. Automakers were hoping to see tariffs eliminated, but Japan only managed to keep them at 2.5% and win a U.S. promise of no more for now.
The agreement only allows Japan to delay auto tariff threats from the U.S. but does not resolve the issue. Chances that the Trump administration will agree to their elimination are considered slim.
Negotiations began last year after Trump complained about the huge American trade deficit against Japan and threatened higher tariffs and other measures.
Hours after the signing in New York, Trade Minister Isshu Sugawara and top ministry officials invited top automakers to a meeting in Tokyo, to gain their understanding about the trade agreement.
There, Toyota Motor Corp. President Akio Toyoda urged government to do more for the auto industry.
“The auto industry already faces extremely difficult challenges amid the rising Japanese yen, the possible impact from the upcoming sales tax increase and other uncertainties,” said a grim-faced Toyoda.
“We do hope that the Japanese government understands the severe situation and provide us further support to help the auto industry to strengthen its competitiveness and grow as a strategic industry,” said Toyoda, who also heads the Japan Automobile Manufacturers Association.
Sugawara said the deal would help assure free and fair trade between the nations.
“This pact would promote a free and fair trade environment in the area of autos and auto parts between Japan and the United States, and we welcome that,” he said.
Trump sought a bilateral agreement with Japan, the world’s third-largest economy, after pulling the U.S. out of the Trans-Pacific Partnership, a Pacific-rim trade pact.
He wants to reduce a chronic U.S. trade deficit that totaled $67.6 billion in 2018, according to U.S. figures.
The two sides reached a basic agreement in late August, but autos remained a major point of contention, with Japan worried Trump might slap new tariffs on autos that make up a significant amount of its exports to the U.S.
At a joint news conference, Abe said he specifically asked Trump and won his reassurance that the pact does not allow additional auto tariffs.
But a USTR fact sheet on the agreement does not even mention auto tariffs, and a joint statement signed by Abe and Trump only has an ambiguous phrase that the two governments agreed to “refrain from taking measures against the spirit of these agreements.”
Washington also did not set a timeframe for eliminating existing tariffs on Japanese autos and their parts. Mari Yamaguchi, Tokyo, AP