Japanification the scourge threatening to go global in 2020 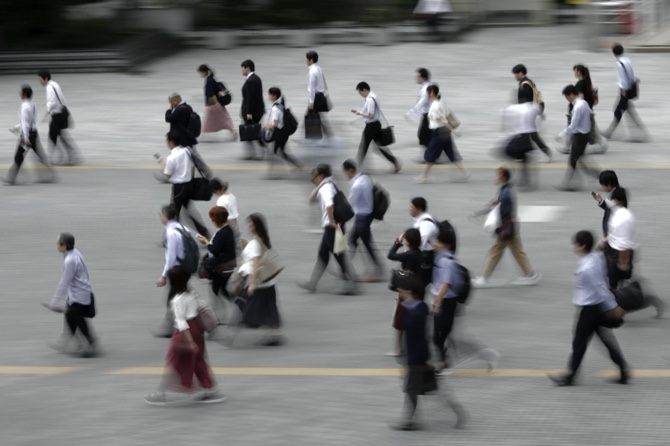 First it was Japan. Then Europe. Now investors are scanning the world for the next outbreak of stagnant inflation and tumbling yields.

The malaise of “Japanification” burst into the mainstream this year, leaving in its wake a record amount of negative-yielding debt. Quantitative easing and a low-rate regime in Europe delivered banner returns on the region’s bonds – at the expense of bank profits and retirement savings. Many say it recalls Japan’s lost decade.

It’s a scourge that threatens to spread further – perhaps even to the U.S. The world’s largest economy might only need a slide into a “plain-vanilla recession” to succumb to zero yields, says Jan Loeys, a senior adviser of long-term investment strategy at JPMorgan Chase & Co.

While strong labor market data last week eased concerns about an imminent U.S. downturn, the country’s yield curve has already signaled a recession is brewing. If that comes to pass, the Federal Reserve could emulate peers in Japan and the euro area by cutting rates to zero and re-introducing QE, according to Loeys.

Add the risk of U.S. political gridlock and excess global savings, and “we stay near zero bond yields for years,” he said.

It’s a scenario preying on the minds of central bankers. Fed Governor Lael Brainard is even floating the idea of asset purchases to suppress short-to-medium term borrowing costs in a scenario of zero-rate benchmarks. That would be akin to Japan-style yield-curve control.

Fed and European Central Bank policy makers aren’t expected to take any action following meetings this week. For the Fed, it will be an opportunity to defend the status quo after three rate cuts this year.

The gangbusters November U.S. payroll report sent Treasury yields higher but hasn’t dislodged bets the Fed will keep interest rates on hold through at least the first quarter of 2020. With inflation still tepid, Chairman Jerome Powell has as good as ruled out a rate increase.

“Central banks have no choice but to be supportive of risk assets and asset prices until such time as fiscal expansion is possible,” said Nomura Asset Management’s Richard Hodges. Japanification-related bets on Europe’s peripheral bonds this year helped him outperform 98% of peers.

In Italy, political risk has done little to deter investors predicting that yields may reach 0% next year amid speculation the ECB could take rates down another notch. Meanwhile, bond-market pariah Greece, which faced borrowing costs of 44% seven years ago, now commands rates of just 1.5%.

Negative yields and a deluge of ECB cash have helped relieve stress in the euro-zone’s shakiest members, but also made it harder for the region’s banks to squeeze out a profit. Pension savings are also at risk, creating an increasingly vociferous backlash.

And yet, another two holdouts among developed markets – the U.K. and Australia – could also soon capitulate to zero or sub-zero yields.

“Japanification is this one big thing that will take a really long time to untangle,” said Chris Rands, a money manager at Nikko Asset Management Ltd. in Sydney, which manages $224 billion globally. “The real problem is sitting in Europe – they’re sneezing and we’re catching the cold.”

Breakeven rates have dropped to, or close to, record lows in Europe and the U.S.

Australia’s central bank may be set to join the ECB and Bank of Japan down the once unthinkable route of QE after cutting its benchmark to a record low of 0.75%.

In Britain, the tipping point could be a no-deal exit from the European Union, according to Citigroup Inc. While a Conservative majority at the upcoming election on Dec. 12 would likely see a divorce deal passed next year, there is still the chance of a cliff-edge exit at the end of 2020.

Volatility gauges suggest options traders are hunkering down for a long period of low rates. After a brief spike in August and September amid a multitude of trade headlines, a Merrill Lynch gauge of price swings in the European sovereign debt market is heading back to the all-time lows seen this year. In the U.S. too, the MOVE index is falling toward the nadir seen in March.

At least the U.S. yield curve has started steepening again on prospects of a late-cycle boost from a potential trade truce between China and the U.S.

“If we do not get a big external event, like a fully-fledged trade war, then obviously we are much more in our baseline muddle-through scenario,” said Sonja Laud, deputy chief investment officer at Legal & General Investment Management in London.

It might not be enough to save more economies from being sucked into the negative-yield trap. Even with better jobs data, 10-year U.S. yields have been stuck below 2% since August.

Jack McIntyre, who helps oversee $75 billion at Brandywine Global Investment Management in Philadelphia, expects U.S. yields to cling to the same low levels next year, but isn’t ruling out the possibility the 10-year benchmark could break through the all-time low of 1.318% set in 2016.

“I’m not in the camp that believes U.S. exceptionalism is going to keep us away from secular disinflationary influences that are driving yields lower,” he said. “If I’m wrong about a recession and the Fed has limited firepower, then yields are going to get pretty close to negative.” John Ainger, Vivien Lou Chen & Ruth Carson, Bloomberg