Johnson presses EU to give way amid no-deal Brexit warnings 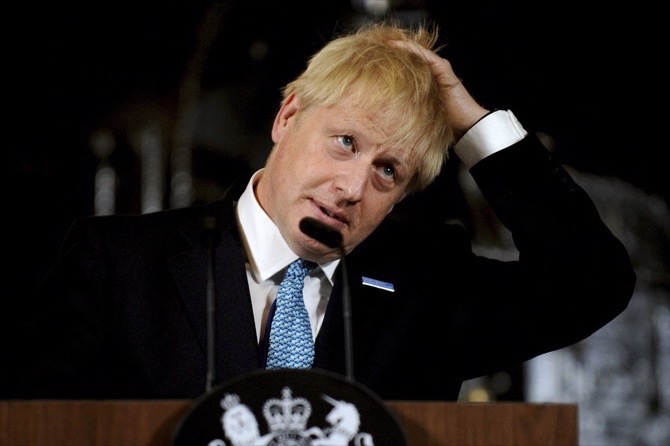 Prime Minister Boris Johnson pushed Britain closer to a no-deal exit from the European Union yesterday, insisting he will not hold Brexit talks with EU leaders unless the bloc lifts its refusal to reopen the existing divorce deal.

Johnson is trying to pressure the EU to give ground by intensifying preparations for the U.K. to leave the bloc in three months without a deal.

But the pound fell to a two-year low as business groups warned that neither Britain nor the bloc is ready for a no-deal Brexit, and that no amount of preparation can eliminate the economic damage if Britain crashes out of the 28-nation trading bloc without agreement on the terms.

Johnson became prime minister last week after winning a Conservative Party leadership contest by promising the strongly pro-Brexit party membership that the U.K. will leave the EU on the scheduled date of Oct. 31, with or without a divorce deal.

The EU struck a withdrawal agreement with Johnson’s predecessor, Theresa May, but it was rejected three times by Britain’s Parliament. Johnson is insisting the bloc make major changes to May’s spurned deal, including scrapping an insurance policy for the Irish border that has been rejected by U.K. lawmakers.

“We’ll keep straining every sinew if there is a deal to be done, but the EU will need to move and, if they don’t, it is incredibly important that we are ready for eventualities,” Foreign Secretary Dominic Raab said yesterday.

The EU says it won’t reopen negotiations on the deal or remove the border “backstop.”

Johnson has spoken to several EU leaders by phone since he took office but has no meetings scheduled. His spokeswoman, Alison Donnelly, said he would not agree to negotiations unless the bloc lifts its refusal to change the withdrawal agreement.

“He remains confident that the EU will stop claiming that the withdrawal agreement can’t be changed,” she said.

If they don’t, she added, “we must assume there will be no deal on the 31st of October.”

Before he took office, Johnson said the odds of Britain leaving the EU without a deal were a million to one.

Economists warn that leaving the bloc without an agreement on terms would disrupt trade by imposing tariffs and customs checks between Britain and the bloc. The British government’s financial watchdog says that could send the value of the pound plummeting and push the U.K. into recession.

The Confederation of British Industry, the country’s biggest business lobby group, urged both Britain and the EU to accelerate Brexit preparations. It made 200 recommendations , including new laws, new IT systems and agreements to temporarily maintain some common regulations.

But it said “the unprecedented nature of Brexit means some aspects cannot be mitigated.”

“It’s like putting sandbags down for a flood. Your kitchen’s still going to be underwater but maybe we can save the bedrooms upstairs,” said the group’s head of EU negotiations, Nicole Sykes.

Another warning came from French automaker PSA, which said it could move production of its Vauxhall Astra model out of Britain if Brexit makes it unprofitable. Chief executive Carlos Tavares told the Financial Times that would mean closing Vauxhall’s Ellesmere Port plant in Wales, which employs 1,000 people.

Johnson, contradicting the opinion of most experts, has said leaving without a divorce deal will be “vanishingly inexpensive” if Britain is properly prepared.

He says he will “turbo-charge” plans for a no-deal Brexit — including beefed-up border measures and a multimillion-pound (-dollar) information campaign for individuals and businesses — and has set up a high-level Cabinet “exit strategy committee” to oversee preparations. Jill Lawless & Danica Kirka, London, AP