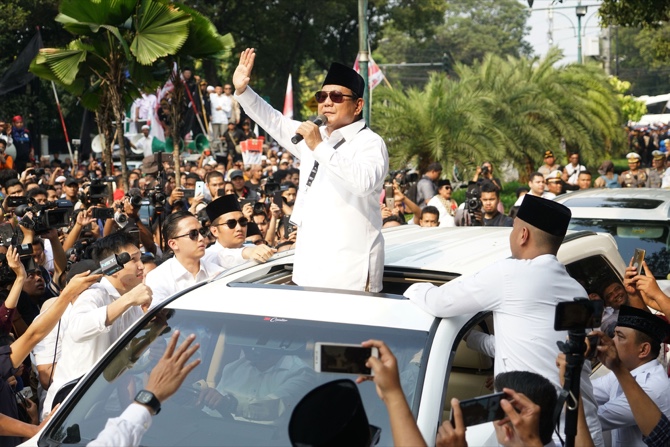 Subianto and his running mate Sandiaga Uno will lower company and individual taxes by between 5 and 8 percentage points over five years and widen the tax-to-gross domestic product ratio to at least 16 percent from about 11 percent, according to Anthony Budiawan, an economist advising the pair’s campaign. Lower taxes will lead to greater compliance and allow the government to cut its borrowings to fund its budget, he said.

The economy has taken center- stage in Indonesia’s presidential election campaign, with Subianto targeting incumbent Joko Widodo’s policy of adding to record government debt to finance building roads, ports and dams worth billions. The swelling of government debt and its high foreign ownership were factors in a market sell-off last year, which saw the rupiah tumble to levels not seen since the 1997-98 Asian financial crisis.

“Our corporate tax is one of the most expensive in the region,” Rizal Ramli, a former finance minister, told reporters in Jakarta on Friday. ‘‘Lower tax rates will make Indonesia more competitive.”

Subianto, who’s popularly known as Prabowo, is taking on Widodo, known as Jokowi, in a rematch of the 2014 election, which he narrowly lost to the former furniture businessman and the first non-elite to occupy the presidential office. The former general has picked Uno, a business-savvy former private equity investor, and has blamed the high public debt and slump in the currency as examples of Jokowi’s mismanagement of the economy.

If elected, Prabowo will also introduce a progressive individual tax rate, with the rich paying more to ensure a more equitable society, Budiawan said. A cut of between 5 and 8 percentage points in corporate tax can boost economic growth by as much as 0.7 percentage point a year in the short term and deliver a 1 percentage point increase in the tax-to GDP-ratio, said Harryadin Mahardika, a member of the pair’s economic team.

While Jokowi’s government has failed to increase the tax ratio despite introducing an amnesty plan while it continued to rely on revenue from commodities and debt to finance the budget, a Prabowo administration will overhaul the tax bureaucracy to make it more efficient, Mahardika said.

“Everyone understands the capability of Prabowo and Sandi. They are entrepreneurs and know what they are doing,” Mahardika said. “The current administration gives false hope. We won’t do that. We can make Indonesia great again as Prabowo said.”

Jokowi, who came into office promising to deliver annual growth of 7 percent, is set to miss the target by a wide margin as the economy has expanded at about 5 percent during his tenure. But the incumbent enjoys a lead of 20 percentage points in opinion polls over Prabowo after he created millions of new jobs and spent billions of dollars to add roads, ports and airports to cut logistic costs in the archipelago.

The incumbent, who’s paired with Ma’ruf Amin, a conservative Muslim cleric, will focus on fiscal and structural reform and development of manufacturing and export-oriented industries to create more jobs, according to Jokowi’s election manifesto.

The return of yield-hungry investors is signaling the worst may be over for Indonesia. Global funds are piling back into Asia’s bellwether for emerging markets, buying USD795 million of debt so far this year and sending yields down about 90 basis points from their October peak as the Federal Reserve looks to take a more cautious approach to policy tightening. That’s spelling relief for the rupiah and Bank Indonesia, which spent most of 2018 seeking to stem an exodus of foreign capital amid a rout in developing-nation assets.

After plunging almost 9 percent over the first nine months of last year, the currency roared back in the fourth quarter as Indonesia raised interest rates to 6 percent, intervened in the foreign-exchange and bond markets and curbed imports to help rein in the trade gap. The rebound has shown no signs of fading in 2019. The rupiah is already up 2.4 percent – tops in the region – and central bankers have signaled a willingness to let the currency strengthen further, according to PT Bahana Sekuritas.

“At the moment, BI appears more inclined to push for rupiah appreciation to lure foreign inflows, rather than to keep the rupiah undervalued to curb imports and boost exports,” Satria Sambijantoro, an economist at the Jakarta- based broker, wrote in a Jan. 9 note to clients. “The one-way strengthening of the rupiah should make Indonesian assets very appealing among foreign investors.”