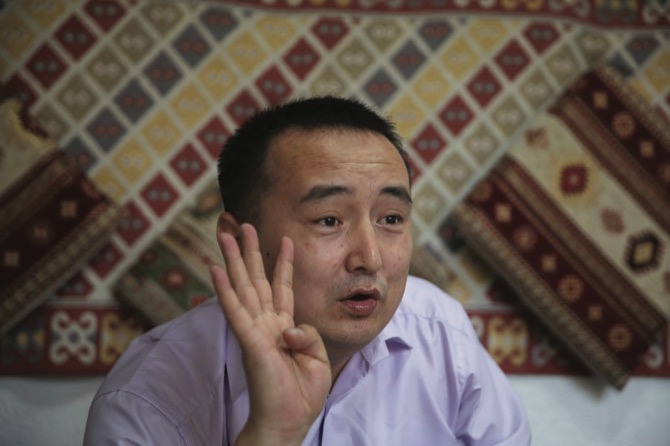 A prominent activist campaigning for the release of ethnic Kazakhs caught in a sweeping crackdown on Muslims in China has been arrested in the Kazakh city of Almaty, his wife and a lawyer said yesterday.

Leila Adilzhan told The Associated Press by phone that her husband, Serikzhan Bilash, head of the advocacy group Atajurt, called her yesterday morning from a policeman’s phone saying he had been arrested and had been taken to Astana, the capital of Kazakhstan.

“When he called me I was so shocked, I couldn’t say a single word,” Adilzhan said. “I’m afraid our government will give him to China.”

Adilzhan said Atajurt’s offices were also being searched in a further sign Kazakhstan is cracking down on the group.

The detention of possibly more than a million Uighurs, Kazakhs and other ethnic minorities into Chinese internment camps has been a touchy issue in neighboring Kazakhstan, a Central Asian country of 18 million people. China is a major trading partner, and Kazakhstan’s state-restricted media had generally avoided reporting on the camps.

Bilash’s group, Atajurt, became prominent last year for supporting the relatives of those who had been detained. They provided financial support, wrote letters to embassies and the United Nations, and taped hundreds of testimonies by relatives looking for their loved ones missing in China’s far western region of Xinjiang.

In a video circulated online yesterday afternoon, Bilash said he had been accused of “inciting ethnic hatred” and was being held by Astana police.

Aiman Umarova, a lawyer advising Atajurt, said she was on her way to Astana to represent Bilash in court and called the case “politically motivated.”

“Bilash’s arrest is connected with his actions against Chinese camps, and his support for Kazakh people and other Muslims in the camps,” Umarova said. “Our government doesn’t want to spoil relations between Kazakhstan and China.”

The Kazakh Foreign Ministry did not immediately respond to requests for comment. A man answering a phone for a police handler said Bilash was being held “temporarily” before hanging up without further comment, according to an audio recording provided by Bilash’s wife.

Bilash had been facing increasing pressure from Kazakh authorities in the past few months. An Almaty court last month found Bilash guilty of illegally leading an unregistered organization and fined him USD656, though his wife said he was planning to appeal.

On Saturday, Bilash sent a video saying four strangers donning earpieces showed up to Atajurt offices and said he was concerned he was in danger. Yesterday morning morning, bloodstains were found at his downtown Almaty hotel room, said Atajurt member Tilek Niazbek.

Bilash has been appointed a lawyer by the state, his wife said. It is unclear what specific charges he faces or when he will appear in court. Dake Kang, Beijing, AP