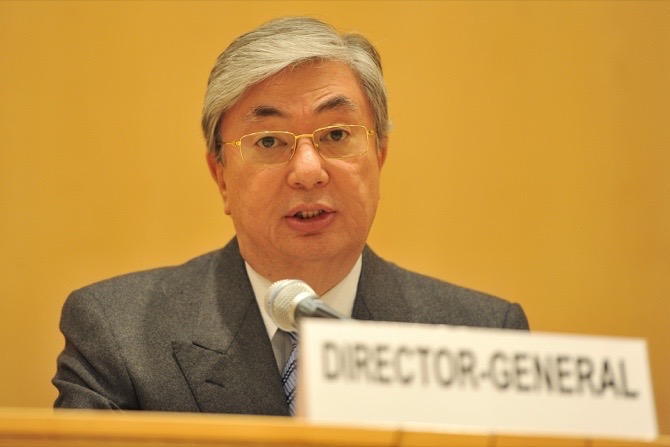 Kazakhstan began a new political era, at least formally, as Kassym-Jomart Tokayev was sworn in as president yesterday, succeeding leader-for-life Nursultan Nazarbayev. One of his first acts was to move Nazarbayev’s daughter into contention as a successor.

The Kazakh Senate unanimously elected Dariga Nazarbayeva as the body’s new chairwoman, putting her formally in the line of succession to the presidency under the constitution. Tokayev, who was Senate chairman before Nazarbayev announced his resignation on Tuesday, nominated her, the Interfax news service reported.

The move adds intrigue to a presidential handover that signaled the start of a long-forecast transfer of power in central Asia’s largest energy producer. Nazarbayev, 78, has ruled Kazakhstan since 1989 and remains head of the Kazakh security council with authority to issue executive orders to state bodies. Lawmakers voted in 2010 also to make Nazarbayev leader for life of the nation that’s sandwiched between Russia and China.

“Tokayev will be a transitional constitutional successor” and Nazarbayev may opt for a different figure including from his own family at the next elections, said George Voloshin, a Paris-based analyst for Aperio Intelligence Ltd. “The real question is: who will succeed Tokayev as president before or in 2020?”

The eldest of Nazarbayev’s three daughters, Nazarbayeva, 55, has often been mentioned as a potential successor, though he has previously ruled out handing power to family members. Another daughter Dinara controls Halyk Bank, the nation’s biggest lender, with her husband, Timur Kulibayev.

Elections are scheduled for 2020. Tokayev, 65, said he intends to continue Nazarbayev’s policies as the second Kazakh president since independence in 1991.

While the central bank said it saw no reason for the tenge to decline, demand for dollars in the morning trading session in Almaty, the financial capital, jumped about five-fold compared to the average volume so far this year. The currency was down 0.5 percent to 378.41 against the dollar as at 3:40 p.m. in Astana.

Tokayev is a former prime minister and career diplomat who speaks English, Russian and Chinese. With Russia and China watching developments closely, he faces a key task in balancing relations with Kazakhstan’s giant neighbors.

In his inauguration speech, Tokayev proposed renaming the Kazakh capital, Astana, as Nursultan, and said the central street of every regional city should be called after Nazarbayev. Portraits of the region’s last Soviet-era ruler will continue to hang in schools and other public buildings, he said, adding that Nazarbayev “remains the only and lifelong father of the people.”

“Nazarbayev has stepped down, of course, but he’s not going very far,” said Konstantin Kostin, a political analyst in Moscow.

Nazarbayev wants to become a Kazakh version of Singapore’s late founding leader Lee Kuan Yew, Alexander Gabuev, senior fellow at the Moscow Carnegie Center, wrote on Twitter. Tokayev is among his most trusted allies and “unlikely to pose a challenge to Nazarbayev’s grip on real power in the future,” he said.

Tokayev’s first challenges include reviving central Asia’s largest economy after Nazarbayev last month replaced the government and demanded trillions of tenge in extra spending to boost living standards. Kazakhstan has spent at least USD18 billion on bailouts since 2009 to keep its ailing banking system afloat, though the money did little to boost lending to the real sector. Nazarbayev complained last month that living costs for Kazakh families were rising while earnings were “flatlining.” Nariman Gizitdinov, Bloomerg