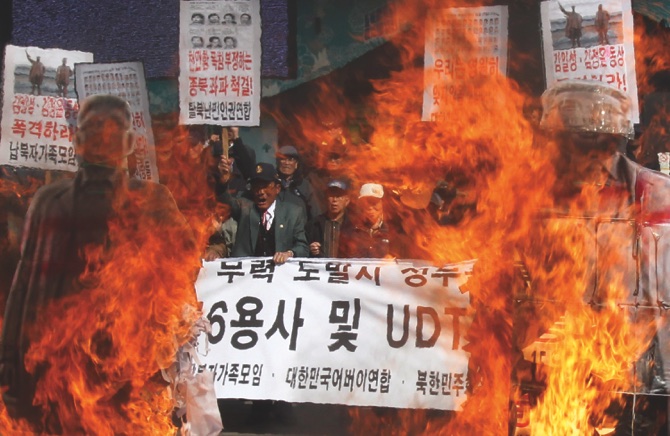 Faced with the killing of its leader’s half brother in what appears to have all the trappings of a politically motivated hit, North Korea is turning up the volume on a familiar defense: Flatly deny the allegations, viciously attack the accusers.

It’s a position the North has been in before, from dismissing U.N. reports outlining human rights abuses or the findings to disputing who threw the first punch in the Korean War.

But, while master of the message at home, rarely, if ever, has Pyongyang managed to effectively sway world opinion.

With evidence emerging that seems to strongly implicate some kind of North Korea connection to the killing of Kim Jong Un’s estranged half brother Kim Jong Nam, the North is intensifying its public attack on the officials in charge of the investigation in Malaysia.

In its first mention of the case, state-run media denied Thursday that North Korean agents masterminded the killing and said the Malaysian investigation was full of “holes and contradictions.”

The response came a day after Malaysian police said they were seeking two more North Koreans, including the second secretary of North Korea’s embassy in Kuala Lumpur, in connection with the Feb. 13 killing of Kim Jong Nam in an airport lobby.

North Korea’s ambassador in Malaysia has made similar statements to reporters. But the decision to carry the story in the North’s highly selective official media is significant because it reflects a level of concern in Pyongyang over the allegations and its desire to push harder with the counter-message of its own.

Pyongyang’s fiery and categorical denials and counter-allegations follow a well-established pattern: It has taken essentially the same tack in response to allegations leveled at it going all the way back to who started the 1950-53 Korean War (Pyongyang claims it was attacked, not the attacker).

To this day, it also disputes as biased and politically motivated the findings of an international investigation into the 2010 torpedoing of the Cheonan warship that left 46 South Koreans dead — calling it “fictitious” and an “intolerable mockery.”

A particularly damning U.N.-
backed report on human rights abuses that came out in 2014 continues to be written off by Pyongyang as based on the lies of “human scum” defectors eager to please Japan, the United States and South Korea in their plot to discredit the North’s social system.

More recently, it flipped the script by claiming South Korean agents had tricked a group of North Korean waitresses at a restaurant in China to defect. Obfuscating the South’s claim that the group defection indicated growing dissatisfaction in the North, Pyongyang accused Seoul of violating the women’s human rights by holding them against their will and is demanding their immediate return.

Malaysian officials have not directly accused North Korea of being behind the killing, and Malaysia is one of the few countries with close ties to the North. But they have arrested a North Korean man working at a Malaysian company along with three other people and are searching for several more North Koreans.

And, not surprisingly, Malaysia has bristled at the North’s attacks on the integrity of its investigation.

According to Malaysian officials, North Korean diplomats were informed of the death the day it occurred; it was not made public until a day later. The diplomats had been at the Putrajaya government hospital closest to the airport for two days before moving to the Kuala Lumpur hospital when the body was transferred there for an autopsy.

Malaysian officials say that although the embassy officials made no public comments for several days, they privately demanded custody of the body and strongly objected to an autopsy. Investigators balked, saying they were following procedure as it was a “sudden and suspicious death.”

Three days after the killing, Deputy Prime Minister Ahmad Zahid Hamidi, who is in charge of police, confirmed widespread reports in the media that the victim was Kim Jong Nam, though he carried identification with a different name.

For North Korea, that’s the most sensitive of sensitive topics.

The North has not acknowledged the dead man is the half brother of its leader — or mentioned Kim Jong Nam’s name — in any of its statements. Information about the family tree of North Korea’s rulers is tightly controlled and few North Koreans are aware that Kim Jong Un even had an elder half brother.

Soon after Malaysia officially pushed that button, Kang Chol, North Korea’s ambassador, turned up at the morgue to demand custody of the body. He wasn’t allowed in.

Kang then did what North Korean diplomats almost never do — he went straight to the cameras and gave an unexpected press conference, accusing Malaysia of “trying to conceal something” and “colluding with hostile forces.” He also pre-emptively said the North would “categorically reject” any autopsy carried out “unilaterally and excluding our attendance.”

His scorched-earth approach may have backfired.

Malaysia’s Prime Minister Najib Razak vowed Tuesday that his country will not be cowed and is resolute in getting to the bottom of the killing.

“Malaysia will stand firm,” he said. “We will be guided by the principle of the rule of law.”

The North now also faces another problem: the South Korean military has reportedly started using loudspeakers to broadcast news of the killing across the Demilitarized Zone.

Not many North Koreans will actually hear those broadcasts, and many of those who do won’t believe them.