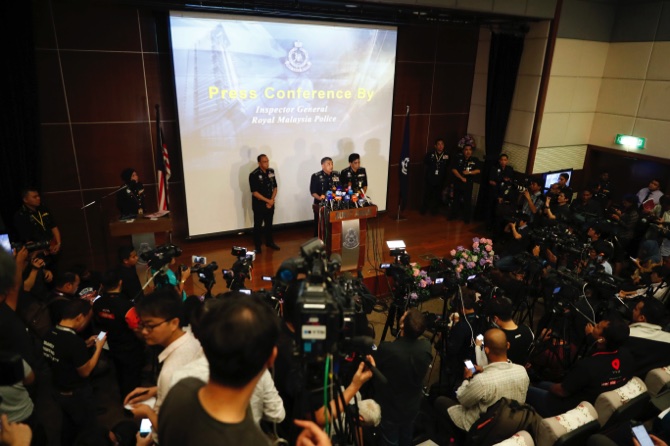 The two women suspected of fatally poisoning a scion of North Korea’s ruling family were trained to coat their hands with toxic chemicals then wipe them on his face, police in Malaysia said yesterday, announcing they were seeking a North Korean diplomat in connection with the attack.

But the North Korean embassy ridiculed the police account of Kim Jong Nam’s death, demanding the immediate release of the two “innocent women” and saying there was no way for them to have poisoned him.

If the toxins were on their hands “then how is it possible that these female suspects could still be alive?” demanded a statement from North Korea’s embassy in Kuala Lumpur. Police say the women — one of them Indonesian, the other Vietnamese — washed their hands soon after poisoning Kim, the long- estranged half brother of the North Korean ruler.

“We hope that the Korean embassy will cooperate with us, allow us to interview them and interview them quickly,” he said. “If not, we will compel them to come to us.”

Police say the substance used remains unknown, but it was potent enough to kill Kim before he could even make it to the hospital.

Khalid said the women knew they were handling poisonous materials and “were warned to take precautions.” Surveillance footage showed both keeping their hands away from their bodies after the attack, he said, then going to restrooms to wash.

He said the women had practiced the attack at two Kuala Lumpur malls.

“We strongly believe it is a planned thing and that they have been trained,” he told reporters.

Khalid couldn’t confirm whether North Korea’s government was behind Kim’s death but added, “What is clear is that those involved are North Koreans.”

Police have already arrested four people in connection with the attack: a Malaysian, a North Korean and the two women. The Malaysian was due to be freed yesterday on bail, Khalid said.

At least one of the women has said she was tricked into attacking Kim Jong Nam, believing she was taking part in a comedy prank TV show. Khalid rejected that claim, saying, “This is not just like shooting a movie.”

But North Korea insisted the women were telling the truth.

“The liquid they daubed for a joke is not a poison and that there is another cause of death,” the statement said.

Police are looking for another seven North Korean suspects in connection with the attack, including the two announced yesterday. The embassy official and the airline employee are among three North Koreans believed to remain at large in Malaysia.

The four other are believed to have fled Kuala Lumpur shortly after the attack. Khalid said authorities believe they are back in Pyongyang, and that they provided the toxin.

“That’s why we asked the North Korean Embassy to trace them and hand them over to us.” He said, though, that Malaysian authorities had received no help so far from North Korea.

Determining the cause of Kim Jong Nam’s death has proven difficult. Malaysian authorities say Kim did not suffer a heart attack and had no puncture wounds, such as those a needle would have left, but they were still awaiting laboratory reports.

Identifying specific poisons can be difficult, especially if a tiny amount was used. The case has perplexed leading forensic toxicologists who study murder by poison, and question how the two women could walk away unscathed after using such a deadly agent.

Khalid noted the two women “were warned to take precautions,” and said security camera footage showed them quickly walking to restrooms after the attack to wash their hands.

Kim had spent most of the past 15 years living in China and Southeast Asia. He is believed to have had at least three children with two women. No family members have come forward to claim the body.

The attack spiraled into diplomatic fury when Malaysia refused to hand over Kim’s corpse to North Korean diplomats after his death, and proceeded with an autopsy over the ambassador’s objections. The two nations have made a series of increasingly angry statements since then, with Malaysia insisting it is simply following its legal protocols, and North Korea accusing Malaysia of working in collusion with its enemy South Korea.

Seoul’s spy agency believes North Korea was behind the killing, but has produced no evidence.

Isolated North Korea has a long history of ordering killings of people it views as threats to its regime. Kim Jong Nam was not known to be seeking political power; he was best known for his penchants for drinking, gambling and expensive restaurants. But his position as eldest son of the family that has ruled North Korea since it was founded could have made him appear to be a danger.

Kim Jong Nam was at the airport to fly to Macau, where he had a home. Eileen Ng, Kuala Lumpur, AP