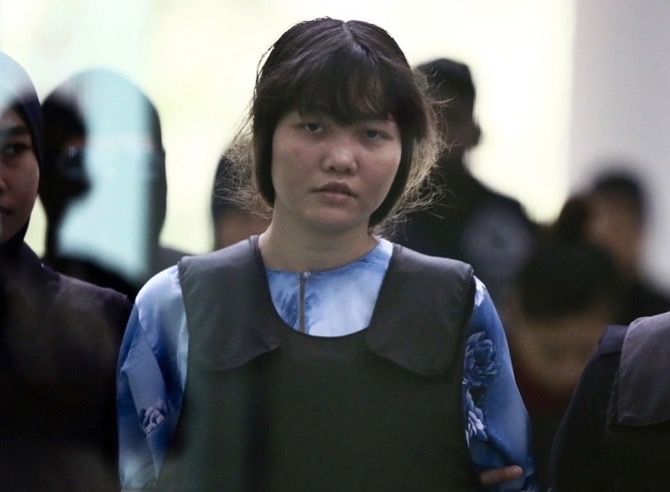 A Vietnamese woman accused of killing the North Korean leader’s estranged half brother told police she realized she had been used to murder him after she was detained, her lawyer said yesterday.

Doan Thi Huong and co-defendant Siti Aisyah from Indonesia were charged with murdering Kim Jong Nam at Kuala Lumpur’s airport on Feb. 13 last year. The two are the only suspects in custody, though prosecutors have said four North Koreans who fled the country were also involved.

The court heard earlier that Huong told police after she was detained last year that she was recruited by a Korean man known as Mr. Y in a Hanoi bar in December 2016. Mr. Y has been identified in court as Ri Ji Hyon, one of the four North Korean suspects who fled Malaysia.

Yesterday, the court heard that Huong thought she was playing a harmless prank for a hidden camera show and only knew Kim was dead after police told her. Her lawyer, Hisyam Teh Poh Teik, said Huong told police that Mr. Y put an oily substance on her hands and told her to rub her hands together before smearing it on Kim’s face, but that she didn’t know it was VX nerve agent.

Huong said she didn’t think the substance was poisonous because it didn’t burn her skin and she wasn’t sickened by it, Teh said.

She told police Mr. Y didn’t ask her to wash her hands or keep her hands away from her body but that she did so on her own because the substance was oily, smelly and felt uncomfortable, Teh said. She went to a restroom on another floor to wash her hands because Mr. Y had told her to leave the scene immediately after the prank, he said.

The court heard that Huong was told by Mr. Y that the video on Feb. 13 would be important because it would be uploaded on YouTube. She told police she wasn’t able to contact Mr. Y after that. She returned to the airport two days later to carry out another prank but there was no sign of Mr. Y and she was detained at the airport.

Huong told police she was given Johnson’s baby cream for a similar prank at the airport two days before the attack on Kim, and didn’t wash it off.

Teh was cross-examining chief police investigator Wan Azirul Nizam Che Wan Aziz, who disagreed with the lawyer’s assertion that Huong was tricked into carrying out the killing and was a scapegoat. He agreed however that Huong, who entered Malaysia on Feb 4, could have fled the country and disposed of her VX-tainted clothing if she had known she was given VX to kill Kim.

Teh told the court that instead, Huong had a flight ticket to return to Hanoi on Feb 23.

Teh also presented a video clip obtained from Vietnamese police showing Huong playing a prank at Hanoi’s airport on Feb. 2 last year and being paid USD100 for it. He told reporters that the target, a Vietnamese civil servant, was willing to come to Malaysia to testify if needed.

The trial is to resume today. AP