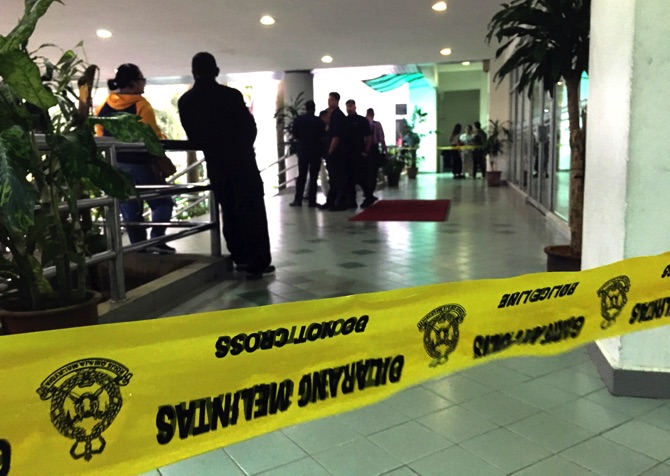 The trial of two women accused of killing the estranged half brother of North Korea’s leader enters its second week with the court moving temporarily today to a high-security laboratory to view evidence tainted with the toxic VX nerve agent.

High Court Judge Azmi Ariffin declared that prosecutors and defense lawyers, along with the two suspects, will hold court at the laboratory for chemical weapons analysis to examine samples of the women’s clothing before they are formally submitted as evidence.

The decision came after government chemist Raja Subramaniam told the court that VX found on the clothing may still be active. Such a move is not unusual in criminal cases in Malaysia, where judges often visit crime scenes.

Hisyam Teh Poh Teik, lawyer for Vietnamese suspect Doan Thi Huong, told The Associated Press that the visit to Raja’s lab is purely for safety reasons. He said the concept of holding a formal court session at the lab is to legalize the visit, which is expected to take an hour, after which the trial will resume in the court building.

Huong and Siti Aisyah of Indonesia pleaded not guilty at the start of their trial last week to charges of murdering Kim Jong Nam by smearing VX on his face at a crowded airport terminal in Kuala Lumpur on Feb. 13. They face a mandatory death sentence if convicted. Defense lawyers have said the women were duped by suspected North Korean agents into believing they were playing a harmless prank for a hidden TV-camera show.

VX is banned by an international treaty as a weapon of mass destruction but is believed to be part of North Korea’s chemical weapons arsenal.

Kim was the eldest son in the current generation of North Korea’s dynastic rulers but was believed to have been cast out by his father and had lived abroad for years. He was preparing to board a flight bound to Macau, where he lived, when he was murdered.

Last week, VX-tainted evidence from Kim Jong Nam’s body and clothing was presented in court in sealed transparent bags. It was not removed from the bags, but the judge and court officials wore surgical masks and gloves as a safety precaution.

During the week’s four trial sessions, prosecutors sought to reconstruct Kim’s final moments at the airport, establish that VX killed him and provide evidence linking VX to the two suspects.

Raja, who is the only Malaysian with a doctorate in chemical weapons analysis, testified he found traces of VX on Huong’s white sweater and fingernail clippings, and on Aisyah’s sleeveless T-shirt. Huong was seen on airport surveillance videos wearing a sweater emblazoned with big black letters reading “LOL,” the acronym for “laughing out loud.”

Raja also confirmed that he found VX on Kim’s face, eyes, clothing, and in his blood and urine samples. Raja testified that VX can be safely removed from the palm of a hand by scrubbing it with water within 15 minutes of exposure, in a possible explanation of why the two women didn’t show any symptoms of poisoning. Raja, the eighth witness to take the stand, is to be cross-examined by defense lawyers today after the lab visit.

Pathologist Mohamad Shah Mahmood also testified there were no signs that a heart attack or other factors had contributed to Kim’s death. He concluded in his autopsy report that Kim died of “acute VX poisoning.”

“It’s no surprise,” said Hisyam, Huong’s lawyer. “We know their [prosecution] narration; we know the evidence that they have. We have a response; we have an answer to every evidence they have adduced so far.”

Gooi Soon Seong, the lawyer for Aisyah, has said the detection of VX on the women is not enough to convict them. “If I have the knife, it doesn’t mean I killed the person. They must have other stronger evidence,” he said.

This week, prosecutors say they will present airport security videos that show the two women carrying out the attack and indicate they knew they were handling poison. MDT/AP