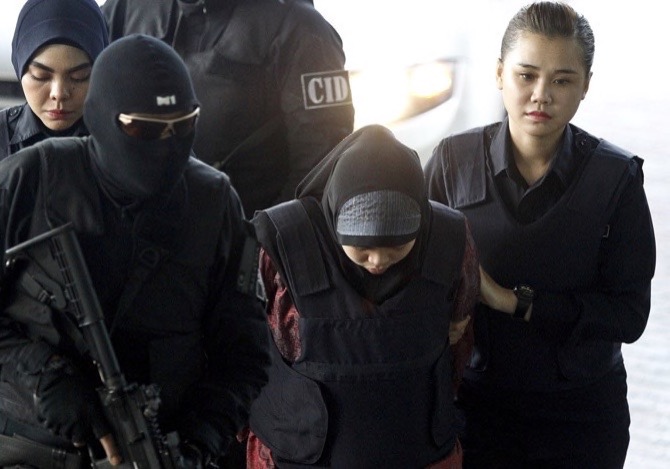 A Malaysian police investigator said yesterday the absence of four North Korean suspects believed to have orchestrated the killing of their leader’s half brother didn’t cause prejudice against the two women who are on trial.

Defense lawyers say Doan Thi Huong of Vietnam and Siti Aisyah of Indonesia are scapegoats in the death of Kim Jong Nam at Kuala Lumpur’s airport on Feb. 13 last year. Prosecutors say four North Korean suspects recruited the women and provided them with the banned VX nerve agent used to kill Kim before fleeing the country on the same day.

Chief police investigator Wan Azirul Nizam Che Wan Aziz disagreed that the absence of the four North Koreans had caused prejudice. “Because in this case, the perpetrators who committed the killing are the two accused,” he told the court.

He denied that police didn’t take adequate measures to pursue the four men nor that his investigations were incomplete without the testimony of the North Koreans. He said Interpol had issued an alert for the four men to be arrested based on Malaysia’s request.

The court has heard that the women thought they were playing a harmless prank for a hidden camera show but prosecutors contend the women knew they were handling poison. The two women were charged to have common intention with the four North Koreans to murder Kim.

They could face the death penalty if convicted, but not if they lacked intent to kill.

Defense lawyers, who are cross-examining Wan Azirul, sought to show that the police official was biased and sloppy in his investigations and failed to probe aspects that could bolster the women’s defense that they had no intent to kill Kim.

They also challenged Wan Azirul’s earlier testimony that Huong was “aggressive” when she smeared Kim’s face with VX and that she had walked very quickly to the washroom after that, saying that he wasn’t an expert in human behavior.

“The investigation was incomplete, biased and one-sided. The real culprits have left and efforts to bring them back or find them were zero. At the end of the day, my client is a scapegoat,” Huong’s lawyer Naran Singh told The Associated Press.

Singh said the four men should be the ones in the dock, and the two women should be prosecution witnesses against them.

Salim Bashir, another lawyer for Huong, said the fact that security videos showed Huong appeared to be touching her hair briefly after approaching Kim and going to a toilet farther away to wash her hands showed an “innocent mind” and not the conduct of someone who knew she had poison on her hand.

Kim, the eldest son in the family that has ruled North Korea since its founding, had been living abroad for years after falling out of favor. It is thought he was assassinated because he was perceived to be a threat to the rule of his half brother, Kim Jong Un.

Malaysian officials have never officially accused North Korea of involvement in Kim’s death and have made it clear they don’t want the trial politicized. AP