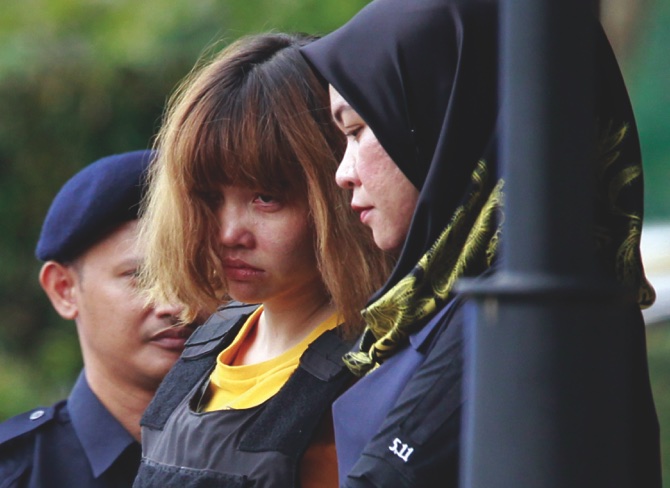 The women, who arrived in court under the protection of masked special forces carrying machine guns, are at the center of a bizarre killing at a busy Kuala Lumpur airport terminal. Many speculate the attack was orchestrated by North Korea, but Pyongyang denies any role.

“I understand but I am not guilty,” Vietnamese suspect Doan Thi Huong told the court in English after the murder charge was read. She looked briefly at the public gallery as she was led out and bowed her head.

The other suspect, Indonesian Siti Aisyah, nodded as her translator told her: “You are accused of murdering a North Korean man at the departure hall” of Kuala Lumpur International Airport. She was dressed in a red T-shirt and jeans.

The women did not enter pleas because the magistrate court where they appeared has no jurisdiction over a murder case. Lead prosecutor Iskander Ahmad told the court he will ask for the case to be transferred to a higher court and for both women to be tried together. 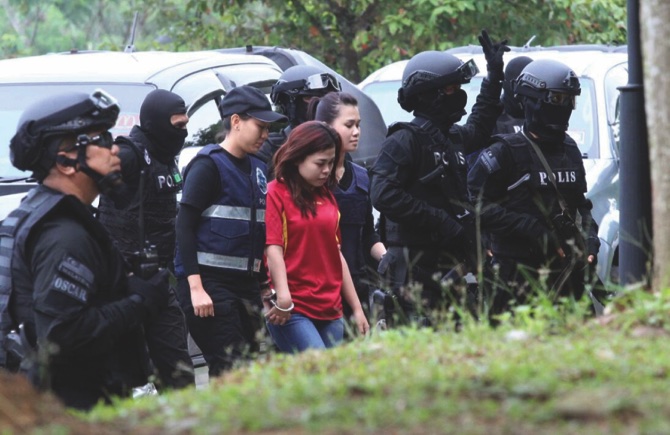 Each faces a mandatory death sentence if convicted. Both women were wearing bulletproof vests as they were escorted from the court to Kajang Prison.

Kim Jong Nam was attacked as he waited for his flight home to Macau on Feb. 13. He died shortly after two women went up behind him and wiped something onto his face.

Both women have reportedly said they thought they were part of a prank TV show playing harmless tricks on unsuspecting passengers. Aisyah told authorities she was paid the equivalent of USD90.

The attack was caught on grainy airport surveillance video; Huong was seen clearly in a T-shirt with “LOL” emblazoned across the front.

Gooi Soon Seng, Aisyah’s lawyer, spoke to his client for the first time yesterday. “Her eyes were red and she says she’s innocent,” he said.

Also yesterday, the court approved a gag order to prevent police and potential witnesses from making public statements about the case.

Meanwhile, Kim’s corpse is at the center of a growing diplomatic battle between North Korea and Malaysia. Speculation is rampant that North Korea was behind the killing, particularly after Malaysia said Friday that VX had killed Kim. Experts say the oily poison was almost certainly produced in a sophisticated state weapons laboratory.

On Tuesday, a high-level North Korean delegation arrived in Kuala Lumpur seeking custody of the body. North Korea opposed Malaysian officials even conducting an autopsy, while Malaysia has resisted giving up the body without getting DNA samples and confirmation from next of kin.

Malaysian officials have confirmed that the victim of the attack was Kim Jong Nam. North Korea, however, has identified him only as a North Korean national with a diplomatic passport bearing the name Kim Chol.

Health Minister Subramaniam Sathasivam said Malaysia will continue to insist that the body be identified by medical examiners through DNA or other means before it can be released. He said the protocol is to release it to the next-of-kin once identification is completed.

Kim Jong Nam is believed to have two sons and a daughter with two women living in Beijing and Macau.

The Pyongyang delegation is also seeking the release of a North Korean arrested in the case, 45-year- old Ri Jong Chol. Malaysia has not described his alleged role in the killing, and it was not clear if or when he could be charged.

Authorities are seeking seven other North Korean suspects, four of whom fled the country the day of Kim’s death and are believed to be back in North Korea. Others sought include the second secretary of North Korea’s embassy and an employee of North Korea’s state-owned airline, Air Koryo.

Isolated North Korea has a long history of ordering killings of people it views as threats to its regime. Kim Jong Nam was not known to be seeking political power, but his position as eldest son of the family that has ruled North Korea since it was founded could have made him appear to be a danger. Eileen Ng, Kuala Lumpur, AP