Kimmo Timonen will retire a champion 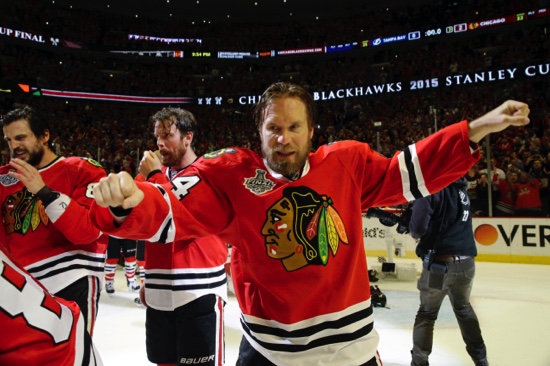 Kimmo Timonen got the Stanley Cup from Jonathan Toews and raised it high above his head, unleashing a cathartic roar in concert with the raucous United Center crowd.
In the final game of a 16-year NHL career and a lifetime in hockey, the 40-year-
old defenseman became a champion at last.
What a big finish for the smallish Finn who overcame every obstacle to the grandest of finales.
Timonen fought back tears and conflicting emotions in the final minutes leading to the best — and the last — moment of his playing days.
“It feels empty,” Timonen said right after he raised the Cup for the first time Monday night.
“It’s been a long journey,” he added. “There’s been good moments, bad moments, tough moments, ups and downs. I was dreaming about this moment for a long time, and it’s right here. This game has given me so much, and I’m relieved, happy, ready to leave this game, and I’m leaving this game as a Stanley Cup champion.”
Timonen affirmed his determination to retire this summer after squeezing one more magical season out of his career, bravely coming back to hockey after health problems due to blood clots that forced him to contemplate retirement.
Traded from Philadelphia to Chicago late in the season specifically for this chance, he never scored a point for the Blackhawks and played sparingly in the postseason — but his name will be etched on the Stanley Cup.
After Toews accepted the Cup from Commissioner Gary Bettman amid the celebration of Chicago’s clinching 2-0 victory over Tampa Bay, the captain swiftly handed it to Timonen, who looked bewildered and overjoyed simultaneously.
“I didn’t know what to do with it,” Timonen said. “I didn’t know you could go around the rink with it. It was my first time. I played this game a long time and battled hard for years. I’ve been on the losing side of the story so many times that I know guys realize that.”
Indeed, Timonen has four Olympic medals with Finland, but no golds. He reached three World Championships finals, losing every time.