Kindergarten gets award for maintaining elements of Macanese heritage 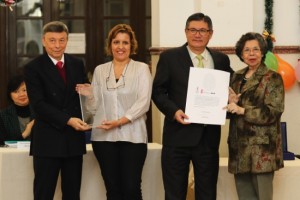 The International Institute of Macau awarded this year’s Identity Award to D José da Costa Nunes Kindergarten “for its contributions to reinforcing the Macanese identity”, according to the institution’s president, Mr Jorge Rangel.
The prize-giving ceremony, held at the school this week, was attended by many prominent figures from within the Macanese community.
“The D José da Costa Nunes Kindergarten is contributing in an effective and persistent way to the preservation of the Macanese identity by developing activities that have been strengthening the Portuguese language and culture,” said Mr Rangel during the award presentation speech.
It was the third time that the award, having been created in 2003, was granted to a school institution. In 2006, it was given to the University of Macau, and was last year awarded to the Macau Portuguese School (EPM).
The kindergarten’s director, Vera Gonçalves, mentioned that the award represents “the cherry that tops the cake” for the school.
“This award that is granted to us, recognizes that in truth, and side-
by-side with the love that the children give us, is the driving force of our commitment to do our job better every time,” she said.
Located close to the Tap Seac Square, the kindergarten was created in 1993 and currently educates 170 students from 10 different nationalities.