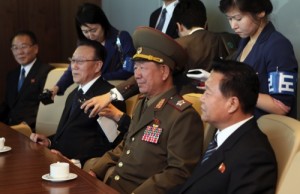 The highest-ranking security advisers of North Korean leader Kim Jong Un and South Korean President Park Geun Hye met for the first time and agreed to push for improved relations between the two countries.
Vice Marshal Hwang Pyong So, political overseer of Kim’s 1.2-million troops, met yesterday with Park’s chief security aide, Kim Kwan Jin, in the South Korean city of Incheon and agreed the two sides should hold another round of high-level talks in late October or early November, Seoul’s Unification Ministry said in an e-mailed statement.
Hwang arrived in South Korea yesterday just an hour after the two countries announced he would attend the closing ceremony of the Incheon Asian Games, which the North took part in. His visit, accompanied by senior Workers’ Party officials Choe Ryong Hae and Kim Yang Gon, took place amid rumors about the health of the North Korean leader, who has been out of the public gaze for weeks. North Korean state television said last week Kim was experiencing “discomfort” in his body.
“North Korea may want to show Kim Jong Un has no problem making political decisions despite his discomfort,” Cheong Seong Chang, a senior analyst at Sejong Institute, said in a text message. “This visit could become the decisive moment that could determine the North-South relations for the remaining three and a half years of Park’s tenure.”
The North Korean delegation, the highest to travel to the South since 2009, will not visit the presidential Blue House because of time constraints during its one-day trip, even though Park had a willingness to meet them, the Unification Ministry said. Park has no plan to attend the Asian Games closing ceremony, her spokesman, Min Kyung Wook, said by phone.
Park has routinely criticized North Korea’s nuclear arms development, calling it a major obstacle to better relations between the sides. Since Kim took power in late 2011 upon his father Kim Jong Il’s death, North Korea has conducted its third nuclear test, drawing tougher UN Security Council sanctions.
North and South Korea have not held a summit between their leaders since 2007. Park said earlier in media interviews she was open to a meeting with Kim if conditions were right. Sam Kim, Bloomberg