Koreas | What to make of Kim offer for nuke talks 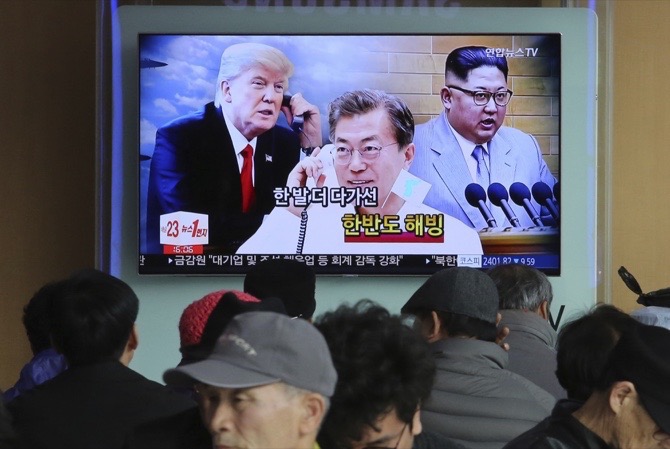 At first glance it seems like a blockbuster: North Korea has reportedly offered up its nukes for negotiation, an abrupt reversal from its repeated vows never to relinquish the “treasured sword” it sees as protection against constant U.S. “hostility.”

Experts reading between the lines, however, believe the North may be falling back on a well- worn position when confronting the United States. Essentially: You want our nukes? Then give us credible security guarantees.

This has been seen in the past to mean the removal of the 28,500 U.S. troops stationed as a deterrent against the North in South Korea and a halt to annual U.S.-South Korean military exercises that the North claims are invasion preparations.

Washington is unlikely to accept any of this, but momentum in inter-Korean ties — South Korea’s president has agreed to meet North Korean dictator Kim Jong Un next month — means there’s a real chance that negotiations could take place.

Here then is a look at the North’s latest offer, which has raised hopes for better days on the Korean Peninsula after a year of nuclear and missile tests by the North and threats of war:

TOO GOOD TO BE TRUE?

According to senior South Korean official Chung Eui-yong, who returned Tuesday from a rare two-day trip to North Korea’s capital, where he met with leader Kim Jong Un, the North said it’s committed to the “denuclearization of the Korean Peninsula” and that it has no reason to possess nuclear weapons as long as military threats against the country are removed and its security is guaranteed.

North Korea also said it’s willing to hold “candid” talks with the United States to discuss the issues of “denuclearization” and normalizing ties. It also promised to suspend nuclear and missiles tests during such future talks, Chung said.

Sounds good, right? After all, Kim has placed nukes at the core of his authoritarian rule over 25 million North Koreans and vowed not to abandon them at any cost.

But the sentences above may simply be a repeat of the way the North has always justified its weapons development: We only need nukes because of the “hostile” policies of the United States and its allies.

By floating a reported desire for the “denuclearization of the Korean Peninsula,” North Korea could be pushing for its long-sought goal of removing U.S. military assets.

Seoul and Washington must also guard against the possibility that North Korea will try to use any talks to weaken economic pressure against it and buy time to further advance its nuclear weapons program, according to Kim Sung-han, a professor at Seoul’s Korea University and a former vice foreign minister.

Another important note: Everything we’re hearing about the North’s offer has come from the South. North Korea’s state media haven’t said anything concrete about what was said during Chung’s trip to Pyongyang.

In fact, the North’s main Rodong Sinmun newspaper yesterday repeated that the country must enlarge its weapons arsenal to deal with “American nuclear threats and blackmailing.”

WE’VE BEEN HERE BEFORE

The complaint by many observers is that North Korea has repeatedly used disarmament talks as a way to ease outside pressure and win badly needed aid, while all the while secretly pressing its weapons development.

Under a 1994 deal with the United States, North Korea pledged to freeze and eventually dismantle its nuclear weapons program in exchange for international aid to build two power- producing nuclear reactors. The deal fell apart in 2002 when a senior U.S. official said North Korean officials admitted to having a secret nuclear program during his visit to Pyongyang.

On-and-off six-nation disarmament negotiations were later held in China from 2003 to 2008. Deals along the way saw North Korea begin to disable its main plutonium-producing nuclear complex as part of an agreement to eventually dismantle it in return for energy aid and other concessions. Those efforts fell apart amid disputes on how to verify the North’s atomic activities. In 2010, the country stunned the region by unveiling a small, industrial-scale uranium enrichment facility that could allow it a second route to manufacture nuclear weapons.

In 2012, a nuclear freeze-for-food aid agreement blew up when the North abruptly launched a rocket into space in defiance of U.N. resolutions.

“The North Koreans have said many times that they don’t oppose nuclear disarmament, but they’ve also changed their positions so easily. The United States knows this very well,” said Go Myong-Hyun of the Seoul- based Asan Institute for Policy Studies.

U.S. President Donald Trump expressed both hope and skepticism over the North’s reported offer, calling it “possible progress” that also “may be false hope.”

The United States, Go said, may face a “dilemma” over whether to accept the North’s reported offer for talks, but, in the end, it may pursue “exploratory talks” to hear directly how far North Korea is willing to disarm.

The most effective way for Washington and Pyongyang to proceed might be an exchange of special envoys, who could work on a potential summit between Kim Jong Un and Trump, said analyst Hong Min at Seoul’s Korea Institute for National Unification.

It seems unlikely to many, however, that Kim will easily give up his nuclear program.

And what might the North demand in any talks?

Possibilities include that the United States modify its annual drills with South Korea, stop dispatching nuclear bombers, submarines and carriers to the region and declare that it won’t attack the North.

“The United States would need to enter any dialogue with very detailed ideas on where it will draw the line in talks with North Korea because there will be a mixture of demands it might be able to meet and those it cannot meet,” Hong said. “It’s unclear whether the Trump administration is ready in this regard.” MDT/AP