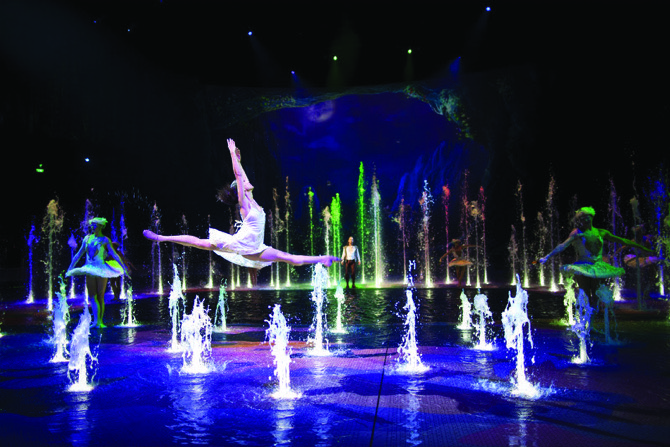 Dragone Macau, which operates The House of Dancing Water, allegedly offered a sum of money to a former employee to incentivize him to withdraw his complaint against the firm. The accusation, made by the employee in question, was revealed in an interview with state broadcaster TDM.

Bernardo Graça, a former artist at The House of Dancing Water, filed a complaint with the Labour Affairs Bureau after he alleged his contract was terminated without cause back in November 2018.

The Portuguese artist joined the artistic team in April 2017 after being hired from Portugal.

However, he noticed irregularities in his working arrangements contrary to his employment contract.

Graça told TDM that fees for both medical and life insurance were deducted from his monthly payroll, and that overtime was not remunerated. He also noted that there was a lack of compensation for employees working on mandatory and public holidays.

Last month, he explained that Dragone Macau sent him an email, requesting a meeting to reach an agreement.

“In the meeting, they offered me money to give up the complaint, for this to be confidential and to settle the issue. […] I am not going to give up until justice is done,” the artist told the state broadcaster.

Graça had already consulted lawyers and brought the case to court on June 17, along with four other employees of the show, to be followed by 30 more people.

The artist shared his disappointment with the company’s handling of the situation, noting that when he approached the human resources department, he was allegedly told to either stay or leave.

“Every time I tried to talk to the company about this problem, they said ‘it’s the way it is. You sign the contact and there’s no change to be made, and if you’re not happy you can leave.’ It was very straightforward […] it’s something I never quite understood,” said Graça.

“All these things were adding up and it came to a point where they said they think I am an amazing artist but they are going to have to dismiss me without cause,” he said, because of the failure to reach an agreement.

Dragone Macau issued a letter to him titled “Termination of Contract Without Cause” on November 15, 2018.

The artist said that within the workplace, there were fears of speaking out, as the artistic world is small. He said that Dragone had many connections outside Macau.

He also shared that many of the employees are blue-card holders, which makes it easier for them to be fired.

“The message I had from other [employees] was that they were all oppressed,” he said. “The oppression was brutal.”

Meanwhile, Dragone argued that their contracts were reviewed by local legal experts.

Matthew Jessner, artistic director of Operations of Dragone, said that The House of Dancing Water is a unique show in Macau, and one that the labor law is not adapted to.

Although he admitted that certain aspects of the contract may not be accordance with the labor law, he justified that the contract exceeds specific requirements stated in the local labor law.

“It was not our willful intention to transgress local labor code, which is evident. As a matter of fact, we spent a great deal of time reviewing some of contracts such that in many cases they go beyond the specific requirements of the labor code […] in Macau or elsewhere,” said Jessner.
“We didn’t just improvise. We consulted local legal counsel so that we weren’t just reading things off the international scale,” he added.

Jessner also believes that the local labor law is not taking into account the industry standards.

Melco Resorts and Entertainment, which operates the City of Dreams resort where the House of Dancing Water production is staged, told the Times that the company does not comment on employees of partners.