Late, yes, but Mayweather-Pacquiao will deliver 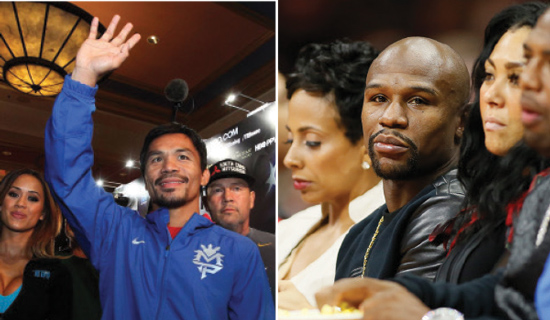 Manny Pacquiao slept through the big announcement, secure in knowing that the fight was already made and the questions would finally stop.
He campaigned for a shot with Floyd Mayweather Jr. with a tenacity befitting a congressman from the Sarangani Province, making him a winner long before the two step into the ring May 2. If Mayweather got most everything he wanted out of the deal, Pacquiao got the thing he wanted most — a chance to finally settle matters inside the squared circle that took him on an improbable path from the depths of poverty in the Philippines.
“Finally! It’s been five years in the making,” Pacquiao told Manila’s GMA television from his hometown of General Santos city. “I’m very excited about this fight. I will no longer be bothered by people who keep on asking if the fight will ever happen.”
That it is happening is in large part due to a carefully orchestrated campaign that began in China in November to build pressure on Mayweather, and a serendipitous meeting at a basketball game in Miami that took place only because an ice storm blanketed the East Coast and delayed Pacquiao’s travel plans.
It’s happening because trainer Freddie Roach ran into CBS chief honcho Les Moonves, which led to a sit down with promoter Bob Arum and kicked off the talks.
Most of all, though, it’s happening because Mayweather himself finally deciding the time was right and the money was so big — he figures to pocket USD120 million or so himself — that he would risk his unbeaten mark and his legacy against the speedy lefty who throws punches in seemingly random combinations that most of his opponents have found difficult to decipher.
Mayweather believes he won’t have those difficulties, and oddsmakers in this gambling city agree with him. They make him a 2 1/2-1 favorite to pocket all the welterweight titles in a fight that will almost surely break all records when it comes to the thing that matters most in boxing these days — how much money can be sucked out of the pockets of box­ing fans starving for the bout.
That means USD5,000 tickets at ringside, and most likely $90-100 to watch the fight at home on pay-per-view. It means rooms that were already jacked up to $1,231 for two nights at the MGM Grand jumped to $1,592 on the announcement, and it means a huge money drop in the casinos and the most money ever bet on a fight.
It means more attention will be paid to a sport supposed to have long been dead than will be paid to sports that are very much alive.
And it means the richest fight and the biggest purses ever paid boxers on a day that will be one of the biggest in sports history with the Kentucky Derby and basketball and hockey playoffs preceding the main event.
What it doesn’t mean is that this will be the fight that will save boxing. You might remember that was supposed to happen in Mayweather’s first megafight in 2007 when he won a decision over Oscar De La Hoya, but all that did was give Mayweather a persona he could sell for his own infrequent fights.
Besides, boxing is beginning to do pretty well even without the fight everyone has wanted for so long. Say what you want about Mayweather adviser Al Haymon locking up almost every boxer who can lace up gloves, but he’s put boxing back on free television — and on two different networks, to boot.
Deontay Wilder, an exciting big puncher and talker who is also an Olympic medalist, has a piece of the heavyweight title. There are rising stars in almost every division, and more competitive fights are being made than any time in recent history.
Strip it all away and this is a fight about legacies, a one-off bout that will end up defining both fighters. That’s increasingly important to Pacquiao at the age of 36 after 20 years in the ring, but it’s crucial for Mayweather — who turned 38 last week — and the way he believes he should be perceived by the world.
Mayweather wants to be known as the best fighter ever, not just a guy who flashes wads of money and wins boring fights. It’s a notion that seems absurd when you consider his lack of fights, hand-picked opponents, and aversion to mixing it up in the ring. But he repeated it when he announced the fight Friday, and it is what he believes.
Give him credit for winning all 47 times he has stepped into the ring. Give him credit for mastering the art of pay-per-view sales and turning himself into a larger-than-life character who commands attention wherever he goes.
But most of all, give him credit for finally stepping up to the plate to make the one fight that fans have been demanding.
Yes, it’s happening five years too late. It probably would have been a better fight when both were in their absolute prime.
Somehow, though, that doesn’t make it any less intriguing. By Tim Dahlberg, Sports Columnist, AP