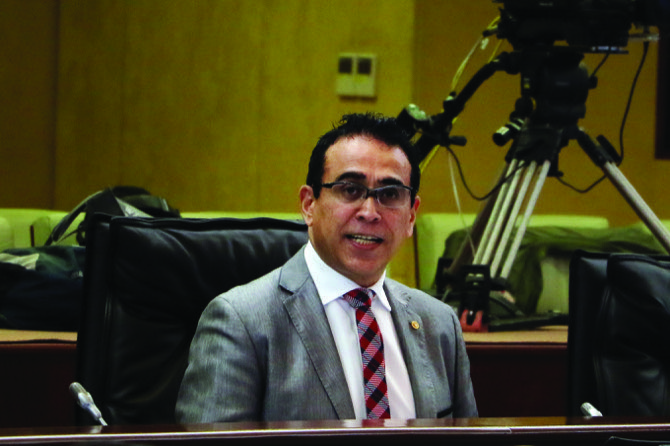 Lawmakers José Pereira Coutinho and Sulu Sou took the period before the agenda for yesterday’s plenary session of the Legislative Assembly (AL) as an opportunity to make remarks regarding the upcoming Chief Executive (CE) election.

Building on the criticism already expressed last week during the AL Spring Lunch, lawmaker Sou highlighted comments from both Ho Iat Seng and Lionel Leong to the media regarding their consideration to run as a candidate for the CE position. Sou noted that both referred to “the importance of support from the public as a decision factor.”

Sou queried in rhetorical form how such support was possible when the election for the CE is conducted behind closed doors “in a room where Macau citizens are even forbidden from looking into.”

“What is undeniable is that the overwhelming majority of Macau citizens do not even have one vote! How can you express your willingness to accept or support someone to stand for election or to be elected?” remarked Sou.

Calculating the total number of people that could be represented by the 400 members of the CE election, Sou questioned: “What are the theoretical and scientific foundations that can prove that 5.5 percent of qualified, competent and intelligent voters can represent the remaining 94.5 of citizens?”

“One line only marks the difference between the ‘trusted man’ and the ‘yes man’,” said Sou, stressing the absence of “a democratic, fair, and open political system.”

In a similar vein, Pereira Coutinho remarked that candidates campaigning for the CE position often make promises that they fail to keep when they take office. He said that the examples of “good governance” mostly come from the leaders, recalling that being the Chief Executive is – or should be – more of a “job of duties than of rights” and that those who put the interests of themselves before those of the region should not pursue the position. RM