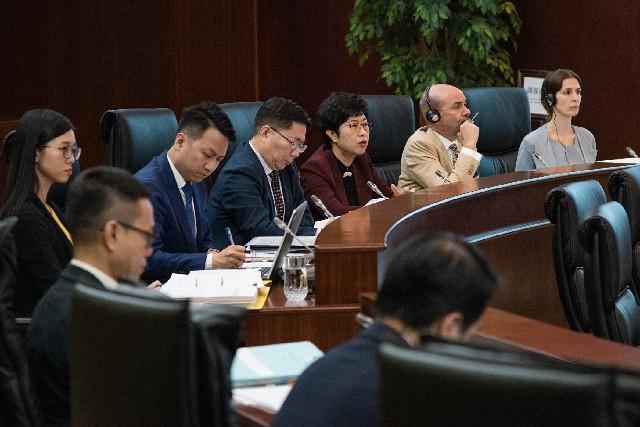 The Secretary for Administration and Justice, Sonia Chan, attends a plenary meeting of the Legislative Assembly

A new bill aiming to promote Macau’s arbitration services has been approved in general terms at the Legislative Assembly (AL), amid José Pereira Coutinho’s concerns that Macau will face great challenges in its promotion. The bill faces a detailed review later today.
The arbitration law aims to attract international arbitrators for the solving of disputes arising in the Greater Bay Area, between China and the Portuguese-speaking countries.
José Pereira Coutinho believes that civil servants “are not that supportive” towards arbitral proceedings when solving disputes in respect to their employment contracts.
The lawmaker specifically wondered how Macau will survive competing with Hong Kong and Singapore in attracting talented people to serve Macau’s arbitration services.
“Hong Kong’s arbitration centers have a long history. People may not choose Macau. There are many places they can choose. Even Macau’s companies choose Singapore when they need to solve disputes,” said José Pereira Coutinho. “What kind of confidence makes you believe you can achieve [making Macau an international arbitration center]?”
Secretary for Administration and Justice Sonia Chan, instead of answering the lawmaker’s question regarding her confidence in making Macau’s arbitration service industry a success, said that it is also local residents’ and the local arbitration sector’s efforts that matter in its promotion.
The Secretary also pointed out the advantages of Macau’s skilled Portuguese-speaking personnel in arbitration services between China and the Portuguese- speaking countries.
She believes that the arbitration law, which eases restrictions for non-local arbitrators working in Macau, will attract globally well-known arbitrators to the region.
In April this year, Hong Kong signed the Arrangement Concerning Mutual Assistance in Court-ordered Interim Measures in Aid of Arbitral Proceedings by the Courts of the Mainland and of the Hong Kong Special Administrative Region. Hong Kong became the first jurisdiction outside the mainland where, as a seat of arbitration, parties to arbitral proceedings administered by its arbitral institutions would be able to apply to mainland courts for interim measures.
Currently, Macau has five arbitration centers: the World Trade Center Macau Arbitration Center, the Voluntary Arbitration Center of the Macau Lawyers’ Association, the Consumer Arbitration Center, the Arbitration Center for Conflict in Insurance and Private Pension Funds, and an arbitration center for building management disputes.
The AL plenary meeting will continue today in the afternoon, and lawmakers will vote on more detailed articles of the arbitration law and other bills.