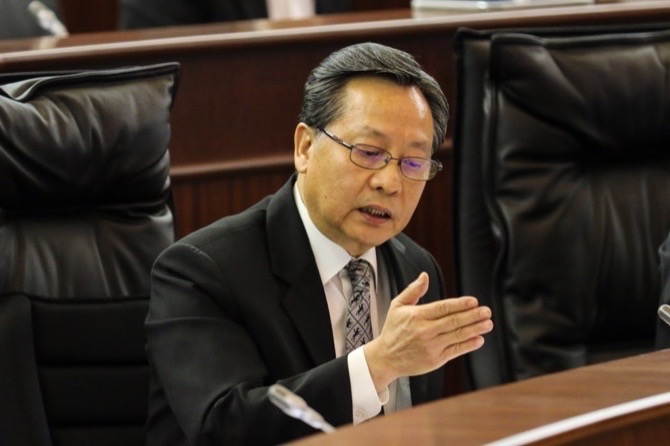 In one of the first sessions with Kou Hoi In as Legislative Assembly (AL) president, several lawmakers took the opportunity to deliver messages apparently aimed at the incoming next government of Macau, soon to be led by Ho Iat Seng.

In fact, the first lawmaker to speak yesterday was also the first with a message for the next government.

Ho Ion Sang remarked on the results of a survey conducted by a local association on the “current situation of Macau and expectations for the next Chief Executive,” noting that the transportation issues scored third on the priorities of the population.

He noted that the respondents elected traffic problems as the most severe category, resonating with 42% of the respondents.
Ho noted, “if this problem is not resolved in the long term, it will affect the stability and sustainability of Macau’s socio-economic development, as well as endangering the future actions of the government.”

Ho also remarked that traffic issues will likely worsen as the city links itself to neighboring cities within the Greater Bay Area plan, adding that the problem concerns both the flow of people and logistics, interfering with urban development.

Separately, lawmaker Ip Sio Kai addressed the plenary to express his disagreement with a study held by the Macao Government Tourism Office on the feasibility of implement a visitor tax in the SAR.

In Ip’s opinion, “the reason why the government made this survey is because there is this idea that there are too many tourists and there is insufficient capacity to receive them.”

“I feel that this way of consulting the population is inadequate and the government, unintentionally, fell on temptation to create a restriction to reduce the number of tourists visiting Macau, which is [a measure] in clear opposition with Macau’s [attributed] position as establishing itself as a World Center for Tourism and Leisure.”

“It can lead to a drop in tourism revenues, undermining the pillars of the industries supporting the economy and directly causing economic instability in Macau,” added Ip.

For the lawmaker the solution to boost other economic areas of the city is simple.

“One should learn from the mainland, taking different measures to optimize tourist attractions,” said Ip. “It is very simple: just paint a wall and add artistic elements [and] young people will be attracted to take pictures. If the neighboring shops have typical snacks, the whole street is energized, because the pedestrian streets with snacks and places to take photos are mandatory stops for young people.”

The lawmaker said that this type of arrangement currently exists with cities such as Beijing, Nanjing, and Chengdu, where there is always a historical and cultural street.