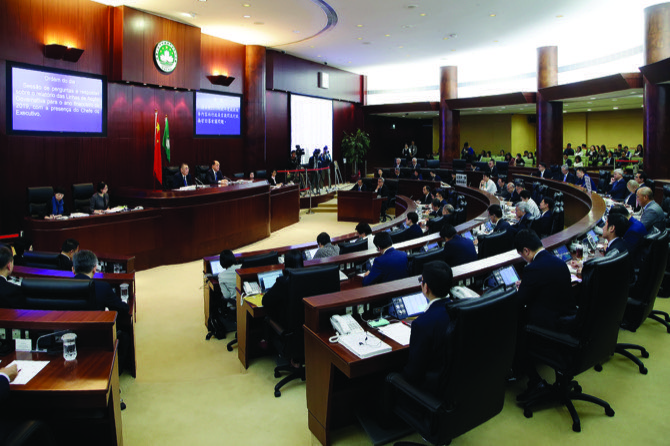 Lawmaker Pereira Coutinho has asked the government about a timetable for the implementation of measures to hold principal government officials more accountable as well as for allowing Macau’s situation to be studied by international organizations, such as Transparency International for Macau, in order to be evaluated on the Corruption Perceptions Index.

However, Kou Peng Kuan, director of the Public Administration and Civil Service Bureau (SAFP), argued yesterday during a Legislative Assembly (AL) session that no significant changes to Macau’s political system could be made without permission from the central government in Beijing.

In response to Coutinho, Kou said that the government had already discussed the accountability issue internally, particularly after Typhoon Hato. The bureau director however, did not reveal the government schedule for the establishment of new measures to enhance principal officials’ accountability.

Coutinho also took the opportunity during yesterday’s AL session to criticize Macau’s corruption index. “How can you spend effort letting organizations evaluate our corruption perception?” asked Coutinho, adding that “you have said a lot of things which we have constantly been hearing about. There is nothing new.”

“There is a joke which goes: ‘the Macau government is very clean’,” added Sulu Sou.

“In the last half year, it has been spread around that Macau only got about 30 points in the Index of Economic Freedom, only higher than the Philippines’ government,” he added.

Sou pointed to a recent report from the Commission Against Corruption (CCAC), which revealed the close private relationships among the staff of the Macau Productivity and Technology Transfer Center.

“I hope that the SAR government can carry out corruption crackdown [activities] before this government ends its term,” said Sou.

Besides the aforementioned lawmakers, Au Kam San also expressed his opinion about the government’s political responsibility. “Rules for the principal officials have not been produced yet. The CCAC even confirmed that the Secretary for Administration and Justice engaged in such improper behavior [… but] the CCAC confirmed that it did not violate the law,” said Au.

In reply to the SAFP director, who had argued that a change to Macau’s political system required the approval of the central government, Au blamed the SAR government for finding excuses to avoid improvement.

The SAFP director refused to budge, insisting that the SAR government places importance upon anti-corruption measures.

Mak Soi Kun has stated that there are difficulties in classifying food waste in Macau, pointing specifically to kitchens in the city and their handling of leftover food.

During yesterday’s AL, an environmental protection inquiry was conducted by lawmaker Si Ka Lon, who asked about regulations of restaurants’ emissions of cooking fumes in particular, as well as other air pollutant emissions.

“Macau’s environmental policies are still lagging behind, and are not catching up to the world’s pace,” Si said.

“We are putting wine bottles, beer bottles and everything else into the same trash bin,” said Mak. “Even if we were to install kitchen waste grinders, it would not be effective because we would put everything inside.”

In Macau, 40 percent of solid waste comes from kitchens, with integrated hotels producing more waste, according to Ho Ion Sang.

Ho proposed that, when Macau builds new buildings, food waste classification facilities and other relevant facilities should be installed during the process. He also asked the government whether it would take gaming operators’ environmental protection measures into consideration during the next gaming concession public tender.

Other lawmakers also expressed that there could be regional cooperation in regards to food waste treatment.

According to Raimundo Arrais do Rosário, Secretary for Transport and Public Works, the local government is working on food waste treatment with the six big gaming operators and “there is no big problem” regarding food waste from casinos and hotels.

According to the Director of the Environmental Protection Bureau (DSAP) Tam Vai Man, the drafting of the administrative regulations on the food processing-related equipment funding scheme will be completed this year. Another regime governing restaurant cooking fumes will also enter legislative procedures this year.

Sulu Sou has asked the government for wider representation in the Standing Committee of the Coordination of Social Affairs.

Recently, the city’s employees and employers reached a new agreement regarding compensation for groundless dismissal.

However, Sou called for stronger protection of employees. He believes that a greater diversity of opinions should be included in the committee.

On the other hand, Mak Soi Kun proposed to the government the improvement of local workers’ and companies’ quality, in order to partially solve the dispute between the employers’ side and the employees’ side.

The lawmaker also criticized the fact that the local government’s policies are tilted toward large- scale companies.

“When small companies opened in the past, they did not think that there would be this many advances in terms of employee protection. In the 1980s, the local government started introducing employer and employee laws. They could only compensate employees if they sold their houses,” said Mak.

In Mak’s opinion, if the local government helps workers to become self-employed or be promoted, then the workers will not turn to the government, and in turn there would be fewer disputes.

Secretary for Transport and Public Works Raimundo Arrais do Rosário has complained that applicants for job vacancies in his sector do not show up for exams.

Yesterday, a proposal to hire more people for his departments was made to Raimundo.

However, the secretary complained that his departments provided 115 vacancies in the past civil servant exams.

“As of today, not even half of the vacancies are filled up. We spent 6.7 million patacas. There were 55,000 applicants, but only 14,000 people showed up for the exams,” said Raimundo.