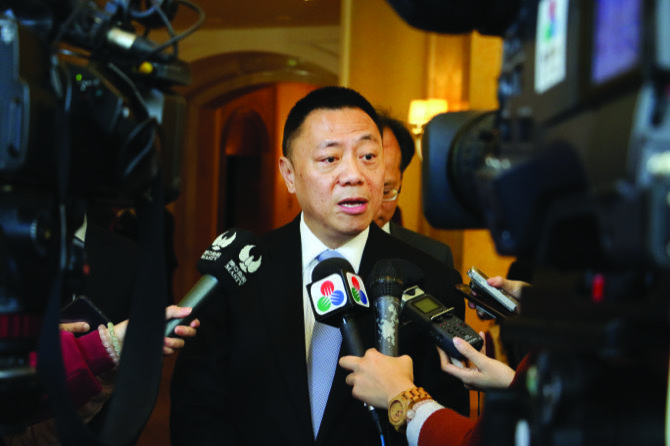 The Macau Jockey Club (MJC) owes a total of MOP150 million in taxes to the government, the Secretary for Economy and Finance, Lionel Leong told media on the sidelines of a seminar yesterday.

According to Leong, the amount owed by the MJC was calculated by the Financial Services Bureau (DSF) based on contracts for concession renewal signed between the government and the concessionaire. The contracts establish mandatory obligations to pay an Annual Fixed Tax which must be settled within a three-year period.

The concessionaire’s commitment to paying the outstanding amount was a condition for the grant of the previous extension of 24 years and six months.

“In 1997, the contract [stated] that the expenses to pay to the government should be MOP25 million, but in 2002 there was a change in that contract. The amount was reduced to MOP15 million which included other payments, [for example] when the profits registered were higher than MOP2.5 billion they also needed to pay taxes. But, as you know, the Macau Jockey Club has been reporting losses over the years. For this reason, it has not been paying these taxes, as they also needed to pay 1 percent for the welfare fund,” said Leong.

The obligations, according to Leong, were reviewed and removed from the contract in 2005.

The Secretary also revealed that from 2002 to 2018, the MJC had been sending a letter to the government every year claiming to be unable to pay such expenses due to its reported losses. This led to the government of Macau exempting them from their obligation to pay.

According to Leong, the government acknowledged in 2015 that the MJC was not paying the amount it should [MOP15 million]. It owed a total of MOP200 million at the time, the equivalent to MOP20 million every year for a decade.

The economy and finance chief also acknowledged that in disclosing the amount owed to the government, “we didn’t take note of any other taxes, interests or inflation.”

Although it is not currently possible to verify this information, as the new contract has not been officially published, the Secretary has assured that the payment of prior debts within the established deadline was a non-negotiable condition  for the grant of the new concession.

“The contract is clear that if they can’t pay within the three year time frame, the concession will be stopped.”

As to why the concession contract had not been terminated earlier, in light of the concessionaire’s failure to meet its payment obligations, Leong reiterated that “from 2002 [the company] has issued a letter every year to the government asking to be exempted from the tax due to recorded losses. We have analyzed the case and found that in 2015 the amount was still unpaid, so we decided to give them these [the currently stated conditions] to pay.”

Questioned on the reasons why, in 2002, the amount to pay back was reduced to MOP15 million (from MOP25 million in 1997), the Secretary responded that he was not aware of the reasons but believed, “[it was] because they saw that they were registering loses.”

“We weighed the situation in relation to the diversification of the gaming industry and the fact the MJC can add more touristic spots [to the region].”