We’ve known for several decades that there is no way for our civilization and most life on the planet to survive a nuclear war, even a limited one, and the ensuing nuclear winter. During the Cold War, nuclear deterrence worked through the “balance of terror.” For this to be possible, all nuclear powers must keep their weapons under tight control.

However, there is the risk of technical errors, accidents, and false alarms that could trigger the use of nuclear weapons. A nuclear power could mistakenly believe it is under attack. A nuclear bomb that detonates accidentally — or even a false alarm — could prompt nuclear retaliation since several countries keep their nuclear weapons in a “launch on warning” protocol.

For nuclear deterrence to be well-balanced, all parties must be in control at all times. This, however, is not the case. There have been several situations where one power has been close to the risk of using nuclear weapons. There is also the risk of an irresponsible person leading a country that possesses nuclear weapons. There is the further risk of nuclear terrorism, should a terrorist organization acquire such weapons. And there is the possibility that hackers could seize control of the nuclear chain of command.

To mitigate the underlying risks, international agreements have been established: the Non-Proliferation Treaty (NPT), the Strategic Arms Reduction Agreement (or START) between the United States and Russia and the Treaty on the Prohibition of Nuclear Weapons (TPNW). Although the United Nations has formally adopted the TPNW, which became effective last year with 86 signatory states, the major nuclear powers — Russia, the U.S., China, France, and the U.K. (the P5) — have refused to support the treaty, arguing that the NPT, coupled with direct negotiations between the nuclear powers, represents the most realistic long-term path to nuclear disarmament. 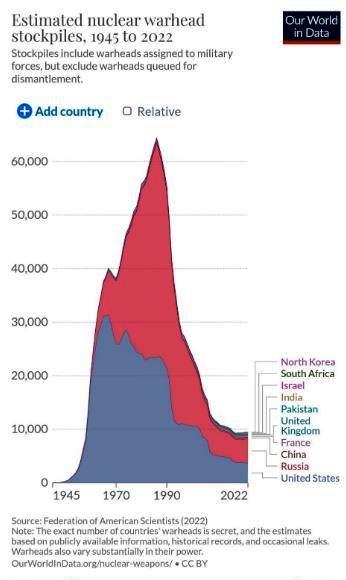 The upcoming NPT Review Conference this month, the first in seven years, is a pivotal opportunity for the P5 and other nuclear states to demonstrate that they are serious about this threat and remain committed to nuclear disarmament. But the outlook for progress is not looking good. And the reluctance of the P5 to reduce their stockpile of nuclear warheads is legitimizing the nuclear aspirations of a growing number of emerging powers.

The START agreement between the United States and Russia is due to expire in February 2026, and it is very likely that a major agreement limiting nuclear weapons between the two traditional nuclear superpowers will cease to exist for the first time in over 50 years. And there are still over 10,000 nuclear warheads.

While there is increasing global pressure upon world leaders to take action on climate change, there is little pressure regarding the eradication or reduction of nuclear arsenals which pose an equally pressing existential threat to life on Earth. It is necessary to increase this pressure, as UN Secretary-General Antonio Guterres has in recent days: “Let’s eliminate nuclear weapons before they eliminate us.”

The dilemmas of balancing Sino-Australian relations

‘State capitalism’, the private sector and the CPC in China (II)

‘State capitalism’, the private sector and the CPC in China (I)