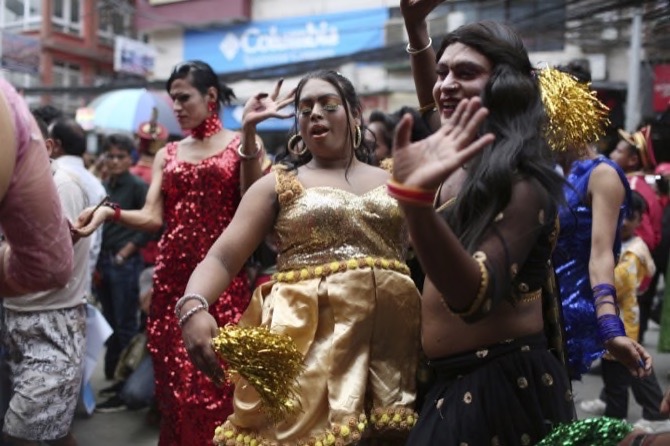 Participants dance at a gay pride parade in Kathmandu

Nepal seized the lead in equal rights for sexual minorities in South Asia four years ago with a new constitution that forbids all discrimination based on sexual orientation. Even citizenship certificates and passports now allow a “non-male, non-female” category.

But same-sex couples such as Niraj Sunwar and Aashik Lama say progress has stalled since the constitution was adopted.

Sunwar, 23, and Lama, 28, are still waiting for the day when they can legally marry. Lama also hopes to adopt a child, which isn’t possible because no laws currently allow it.

“We want to be lawfully wedded in a government office and have a legal certificate so we can openly live the life we want,” Lama said. “We want to adopt a baby and start a family life.”

Such rights were enshrined in the constitution, which was introduced after the abolition of Nepal’s centuries-old monarchy, because of a 2008 Supreme Court ruling that outlawed all discrimination against sexual minorities. LGBT activists, however, say politicians have failed to write new laws that reflect their rights.

Even worse, a Civil Code that was passed through parliament and came into force last year has moved things backward by clearly stating that marriage is a union between a man and a woman.

“Nepal opened the way and other countries are following, but it has stalled here,” said Manisha Dhakal, executive director of the Blue Diamond Society, an LGBT rights group. “Parliament has no commitment; it just doesn’t want to do it.”

In addition to banning sexual discrimination, the new constitution provides special privileges to minority groups, including a reserved number of government jobs and educational positions. The LGBT community has been defined as a minority, but receives no such reserved positions.

“Though the constitution says clearly there should be no discrimination on the basis of sexual orientation, there are no laws to support it,” said Pinky Gurung, an LGBT rights activist.

Under a new citizenship bill being prepared in parliament, transgender people seeking to change their status would be required to show medical proof, but the bill does not clarify what kind, Dhakal said.

“A provision requiring us to get examined physically violates our privacy,” she said, also noting that sex change surgery is currently unavailable in Nepal and unaffordable for most transgender people.

She said activists are planning to go to court to demand equal rights, and then take the issue to international rights groups to pressure the government.

Nepal’s constitution was ahead of its time not just at home but also in South Asia.

If the rights were granted as they appear in the constitution, Nepal would be head of almost every country in all of Asia. Taiwan in May became the first place in the region to legalize same-sex marriage.

There is no accurate number for the size of Nepal’s LGBT community. The next census, held every 10 years, is planned for 2021, and Gurung said they are demanding that the number of LGBT people be counted.

Because there is no census data, there are no quotas for jobs, educational positions or health care slots for the LGBT community. And activists say discrimination against the LGBT community in Nepal is still all too common in everyday life.

“Because there is no same-sex marriage provision in Nepal, we have been facing difficulties in society,” Sunwar said. “When we walk in the street together, our neighbors always look down on us because two men are living together as a couple.”

They have been living together for two years, but only told their parents a few months ago.

For Meghna Lama, who has been running Pink Tiffany, the first LGBT-friendly restaurant in the heart of Kathmandu’s tourist district, overcoming challenges has become routine. Binaj Gurubacharya, Kathmandu, AP