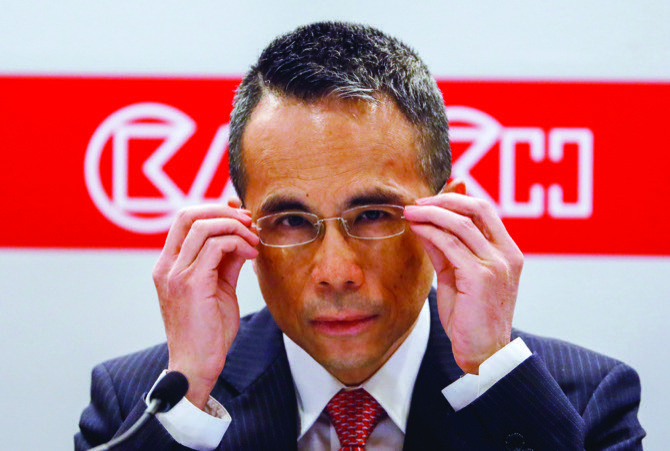 Following in his father’s footsteps was always going to be a challenge for CK Hutchison Holdings Ltd.’s Victor Li.

Li Ka-shing, the self-made billionaire who over seven decades turned a plastic flower business into a global empire spanning ports and property to telecommunications and retailing, last March announced he would retire. He then handed the top position at the family- controlled conglomerate to his eldest son.

Twelve months later, Victor Li, 54, has learned a tough lesson about being the follow-up act to a legendary figure in Hong Kong and investors have been pretty unforgiving so far.

The stock price of the family’s flagship company, CK Hutchison, has dropped 16 percent in the year since Li Ka-shing announced his retirement. During that time, the benchmark Hang Seng Index has fallen 8.1 percent.

“Li Ka-shing has been a unique asset of the family group, which unfortunately is not transferable to the next generation,” said Joseph Fan, a Chinese University of Hong Kong professor who specializes in family-run businesses.

The elder Li, now 90, started out as a refugee and built a fortune that made him the city’s richest man, earning him a reputation among local residents as a deal maker on par with the likes of Warren Buffett.

The next tycoon to step aside may be Henderson Land Development Co. Chairman Lee Shau Kee, the city’s second-richest man. Lee, 91, is considering retiring and having sons Lee Ka Kit and Lee Ka Shing take over, the company said in a stock exchange filing last week.

Even as CK Hutchison’s profit has jumped, Victor Li’s attempt to put his stamp on the group’s future has led to some setbacks abroad, with the group retreating from several high-profile deals. Closer to home he has moved cautiously, focusing on redeveloping properties and leaving untouched a board of directors composed largely of old-timers.

“There’s not much change. It’s just having an extra title,” Li said at a Hong Kong press conference on Thursday following the announcement that CK Hutchison income rose 11 percent in 2018 to HKD39 billion (USD5 billion), on a 9 percent gain in sales to HKD453 billion.

With the retirement of his father, nicknamed Superman by the local media, the younger Li has yet to win over investors who doubt he has the same magic touch, according to Richard Harris, Hong Kong-based chief executive officer of Port Shelter Investment Management.

That’s not for lack of trying. The younger Li didn’t waste time seeking to reshape the family business: In June a consortium of the group’s companies offered AUD13 billion (USD9.3 billion) for APA Group, an Australian operator of gas pipelines. The price tag represented the biggest overseas acquisition offer in CK’s history.

The deal imploded, with Australian Treasurer Josh Frydenberg in November rejecting it as “contrary to the national interest.”

Li’s ability to make deals abroad is suffering in part from his father’s decades of work cultivating relations with the Chinese leaders, according to CGS-CIMB Securities analyst Raymond Cheng. “Superman is seen as having close ties with the Chinese government, while Western countries are growing skeptical of such backgrounds,” he said.

At the press conference, Li defended the group’s overseas purchase plans, saying CK Hutchison today is seen as a global company although Hong Kong is its home. “We don’t feel excluded in other places in the world,” he said.

Li has had victories closer to home. In July, the group disclosed a plan to redevelop Hutchison House, a stolid 1970s-era building in Hong Kong’s Central district. The new 490,000-square-foot building could double the project’s rental income when completed in 2023, with a value that could reach HKD35 billion, according to Bloomberg Intelligence.

The Hutchison House project is one of several redevelopments of existing Hong Kong properties as Li devotes more attention to the group’s backyard, according to Morningstar Investment Service analyst Phillip Zhong.

“He has a greater belief there are more opportunities in the Hong Kong property sector,” he said. “Because of the setback they had in Australia and improving sentiment here, there’s a shifting of the focus back to Hong Kong.”

In the boardroom, Li is still largely working with his father’s team. The average age of members of CK Hutchison’s board of directors is more than 73, the oldest among companies on the Hang Seng Index, according to data compiled by Bloomberg. The average for index member companies is 61.

Affiliates CK Asset Holdings Ltd., CK Infrastructure Holdings Ltd. and  Power Assets Holdings Ltd. aren’t far behind, with all three ranking in the top 10 of the oldest boards of companies on the index. CK Hutchison declined to comment about board composition and corporate strategy.

The news from abroad wasn’t all bad for Li. In June, CK Asset spent 1 billion pounds (USD1.3 billion) to acquire the London headquarters of UBS Group AG. The group took control of mobile operator Wind Tre SpA by buying out its partner for 2.45 billion euros ($2.8 billion) in September.

Li has slowly been building ties with Chinese tech companies by agreeing to deals with Ant Financial, Xiaomi Corp. and Meitu Inc. to sell smartphones, offer digital payments and provide other services in CK’s retail stores.