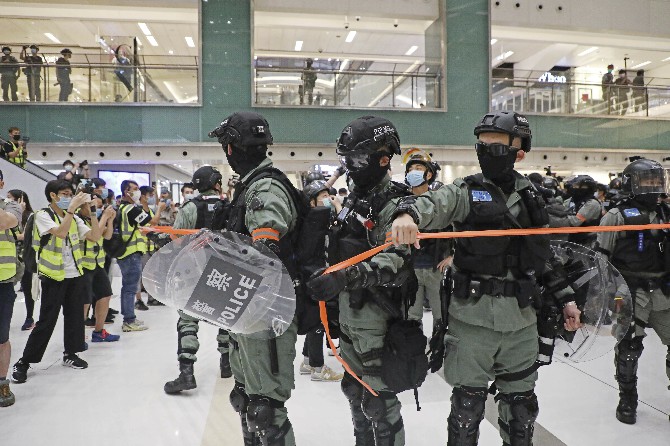 China’s Liaison Office in Hong Kong accused protesters of jeopardizing the future of the city, calling demonstrations on Friday “illegal activities,” in the latest signal that China’s top agency in the city intends to take a more hands-on role in the semi-autonomous territory.
In a statement published on Saturday on its website, the Liaison Office said “extremist radicals” were involved in illegal gatherings, harassment of shops and throwing of petrol bombs. It accused them of trying to incite people into taking part in violence at a time when the international community was jointly battling the coronavirus pandemic.
“Does Hong Kong have a future, if such malfeasances are let go?” it asked.
China has taken a more assertive approach since replacing top officials responsible for Hong Kong earlier this year. The Hong Kong and Macau Affairs Office, the Beijing-based agency that oversees the Liaison Office, drew criticism from local lawyers and opposition lawmakers last month after claiming the bodies weren’t bound by constitutional provisions against interference in local affairs agreed before the former British colony’s return to Chinese rule in 1997.
The Liaison Office said that violence was the reason for a rising wave of business closures and unemployment in Hong Kong. Negative economic growth and a slipping in the rankings of the city’s universities shows how the world is losing confidence in the city, it said.
The office also criticized opposition lawmakers for promoting the so-called “yellow economy” without regard to free-market rules for the purpose of gaining seats in the upcoming Legislative Council elections. Protesters encourage people to boycott pro-China and pro-government businesses, and to support the “yellow economy” of shops and companies that back their cause.
Customers wearing protective masks line up in front of a Lung Mun Cafe restaurant following a call to support businesses sympathizing with the pro-democracy movement, the so-called “Yellow Economy”, May 1.
Fifteen people, including prominent pro-democracy activists and a lawmaker, were arrested last month, a move that antagonized protesters who had paralyzed the city for much of last year and drew fresh condemnation from the U.S. and the U.K. The coronavirus outbreak essentially brought a halt to social unrest in the city.
Riot police were deployed across Hong Kong on Friday as anti-government protesters queued outside local businesses known to support the democracy movement, Radio Television Hong Kong reported. Police arrested a 15-year-old boy in connection with a suspected petrol bomb, RTHK said in a separate report. Ina Zhou, Bloomberg