Light rail gates not yet equipped with e-payment option 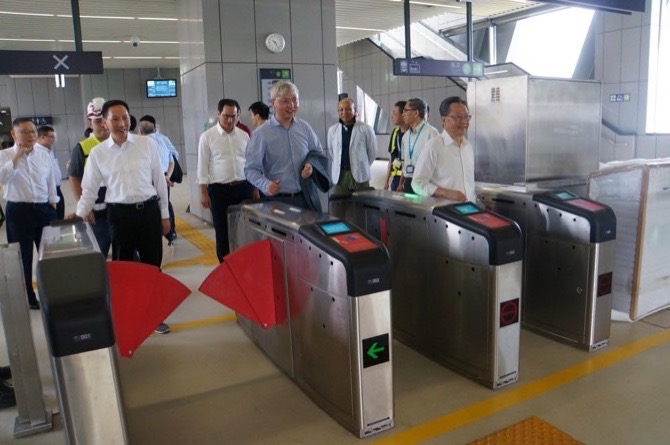 The Light Rapid Transit (LRT), more commonly known as the Light Rail, is not currently equipped with a tap-and-go payment for passage through gates.

The government explained that this is due to the contract provisions agreed upon earlier with the system’s manufacturer, Japan’s Mitsubishi Heavy Industry.

In most modern urban railway systems such as the Metro in Taipei and Kaohsiung, as well as the MTR in Hong Kong, tap-and-go by e-payment has been in use for a long time. Hong Kong’s system has been in service for nearly 22 years.

In the meantime, a similar payment system in Macau, the Macau Pass, was introduced in March 1999.

Lawmakers were invited to visit the LRT depot on Monday and ride one of its trains.

Among the 22 visiting lawmakers, Wu Chou Kit asked the government why the gates were not equipped with e-payment facilities. The government explained that this function was not stated in the transaction contract with the Japanese manufacturer, and therefore could not be added.

The government has recommended a solution. Passengers will be able to buy tickets by cash or Macau Pass at one of the vending machines, and they will use these tickets to pass through the gates.

The government has also pledged to work on cross- mode transit. Sulu Sou, who was also at the visit, has doubts as to how the government will realize this. “Without taking both means of transport with the same card, transit with discount may be difficult,” Sou said.

He also said that single-trip tickets will be sold without discount, but the LRT system will provide a stored value card which entitles its holder to a discount on each ride. He also voiced agreement that work should be done to combine the two payment systems.

Nonetheless, the lawmaker is satisfied with the LRT trial ride. “The huge windows – almost floor to ceiling – are impeccable. The ride was quiet and stable,” Sou said.

Finally, he pointed out that the public should be aware of a potential flaw in the service agreement between the government and the MTR subsidiary in Macau which manages the LRT services.

“We may enter a paradox that when incidents happen in the future, only the technical owner of the LRT company will take the blame, but not the MTR. Provisions should be added to avoid this situation.” Staff reporter