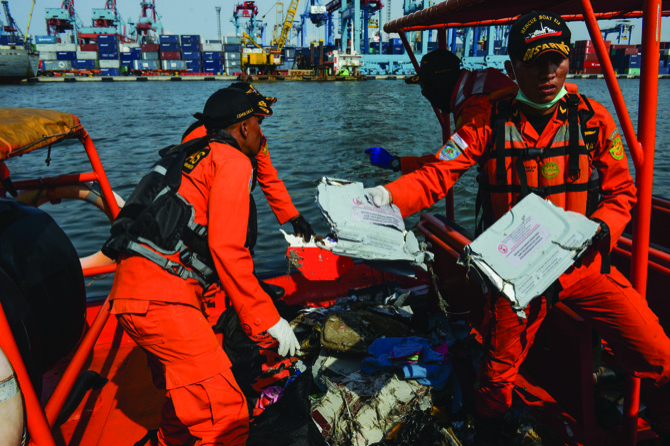 The investigation into the fatal crash of a Boeing jet from Asia’s second-largest budget airline has turned the spotlight on the ballooning growth of low-cost carriers in the region and the training, staff and facilities needed to support them. Rising wealth is adding a million new Asian fliers a year, spurring entrepreneurs, full-service airlines and regional governments to try their hand in an industry notorious for price wars and outside forces that have doomed dozens of ventures.

Vietnam’s Bamboo Airways is the latest to join the market with its first flight due this month, feeding holidaymakers to the resorts of owner and property billionaire Trinh Van Quyet. AirAsia Group will follow with a joint venture in the same country in August. Japan Airlines Ltd. aims to get a medium- and long-haul budget unit up and running by 2020, while in South Korea, at least four new aspirants have applied for permits.

New, longer-range and fuel- efficient planes are encouraging more routes. But the loss of Lion Air Flight 610 last month in Indonesia, and a preliminary accident report that criticized the carrier’s safety and maintenance regimes without identifying the cause of the crash, has highlighted some of the factors that make the commercial operation of no-frills airlines so precarious.

Potential growth in Asia is huge. LCCs accounted for close to 55 percent of all seats within Southeast Asia so far this year and more than 60 percent in South Asia. Yet some of the biggest markets in the region are just getting going. China got its first no-frills airline – Spring Airlines Co. – in 2005, and Japan and South Korea are also now embracing the trend.

With the list price of a new 737 MAX starting at around USD100 million, strong financing and deep pockets are a must for setting up an airline. Most budget carriers are either backed by the fortune of an existing business, such as Trinh’s property empire, or are affiliates of a full-service carrier, like Singapore Airlines Ltd.’s Scoot.

But buying or leasing planes is only the start. Budget carriers compete by meticulous attention to trimming costs, using computer algorithms to maximize the number of passengers and seat revenue while dispensing with all but the most basic free amenities. Get the calculation wrong and an LCC’s slender margins can rapidly vanish.

The biggest cost of all is fuel and low cost carriers have been suffering. For the airline industry as a whole, fuel will probably account for about 24 percent of costs this year, according to IATA, but for budget airlines the proportion is often much higher.

Airlines have had some respite recently as the price of benchmark Brent crude oil tumbled 25 percent in the past two months, bringing the level back to where it was a year ago. That may not be enough to prevent more players from failing after two European operators went to the wall this summer.

For carriers pursuing the expanding business of long-haul budget flights, the fuel equation is even more critical.

“On long haul there are fewer possibilities for LCCs to reduce costs’’ said Joanna Lu, head of Consultancy Asia for FlightGlobal. “Passengers expect a bit more in terms of comfort on longer flights and the full-service carriers benefit from having high-yielding premium traffic to achieve profitability and, crucially, to offer competitive fares in economy class.’’

One entrant into the transcontinental budget arena, Norwegian Air, will end its London-Singapore service next month, starting instead a route from the U.K. capital to Brazil’s Rio de Janeiro.

More airlines means more demand for pilots and cabin crew, but there is already a global shortage of trained pilots and the boom in demand in Asia is making the situation worse. Even with an increase in the number of schools training pilots in countries such as Indonesia and the Philippines, it takes years for a student to qualify as a co-pilot on a commercial airliner and years more before they have enough experience to take command.

Demand for new pilots worldwide is expected to be over 630,000 by 2036, with the Asia-Pacific region alone requiring more than a quarter of a million, according to Boeing Co.

A key constraint on Asia’s aviation growth is the availability of airport facilities, not just landing slots, but quality maintenance, security and air traffic control. China has been adding new civil airports at the rate of about 10 a year for the past decade, according to the nation’s Civil Aviation Authority, and most major hubs in the region have either been rebuilt or have added terminals to cope with a surge in traffic.

Yet most are barely keeping up with demand.

Worse still, many airports in the region, especially those in second-tier cities often favored by budget carriers, don’t have the body and luggage scanners, maintenance facilities or modern air traffic control systems that meet the security and safety requirements for large-scale traffic.

“The biggest challenge that LCCs face in Asia is the lack of suitable airports,” said Jeffrey Lowe, managing director of Hong Kong-based Asian Sky Group. “In Asia these small to medium size airports don’t exist yet so you are stuck using the existing big, expensive international gateway airports, which are already at capacity in most cases.”

One area where Asian airlines face bigger hurdles than their European counterparts is in the region’s fragmented regulations and restrictions. The European Union’s open skies policies allow carriers more freedom to locate, merge and fly throughout the bloc, while in most of Asia, national interests and subsidized government-owned flag carriers make for a less even playing field.

In India, where low-cost Indigo has almost half the total market share and budget carriers compete fiercely for the growing ranks of Indians who are taking to the skies, crippling taxes, government restrictions and devastating price wars have taken their toll. Since 2007, at least a dozen airlines have vanished or merged, including low cost carriers such as Kingfisher Airlines Ltd. and Sahara Airlines Ltd.

A continual push by the Association of Southeast Asian nations to open the region’s skies, together with a cornucopia of holiday destinations, has made the group of 10 countries a hot-bed for budget airlines. Since Malaysia-based AirAsia Group was turned into a low-cost carrier in 2002, it has become Asia’s biggest by passengers flown and Southeast Asia now has more than 10 major no-frills airlines, taking about half of the market share.

Southeast Asian LCCs have a staggering 1,400 aircraft on order, compared with fewer than 400 for full-service carriers, according to CAPA. In South Asia the budget order book is more than 700 aircraft. Kyunghee Park, Jill Ward, Bloomberg