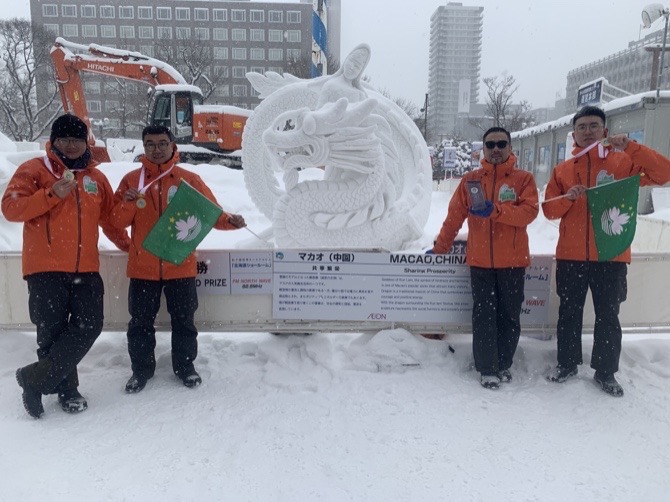 The Macau Culinary Association sent a team to participate in the 46th International Snow Sculpture Contest in Hokkaido, Japan, and won second place with a snow sculpture named “Sharing Prosperity.”

Sponsored by the Macao Government Tourism Office (MGTO), the snow sculpture team has participated in the competition for four consecutive years (2016 – 2019) and brought home a championship and three second-place prizes.

According to a statement issued by the MGTO, this year’s local team had four members, namely Perry Yuen, Tam Kwok Leung, Lon Hou In and Kou Weng Cheong. Aiming to depict an aspect of local culture, the team created a dragon undulating around the Kun Iam Statue.

Held in Hokkaido, Japan, the Sapporo Snow Festival is a popular winter festival that attracts over two million visitors from domestic cities and abroad every year, and is widely covered by media from across the world. A major highlight in the Sapporo Snow Festival, the International Snow Sculpture Contest pitted teams from China, Korea, Finland, Hawaii, Indonesia, Macau, Poland, Singapore and Thailand against each other this year. The teams carved their snow sculptures openly on site from 3-7 February.

The MGTO’s sponsorship of the Hokkaido event aims to promote the region and attract more Japanese and international visitors who enjoy participating in events and festivals. At present, Japan is the fifth largest source of visitors to Macau. Japanese visitor arrivals to the region surpassed 320,000 in 2018.