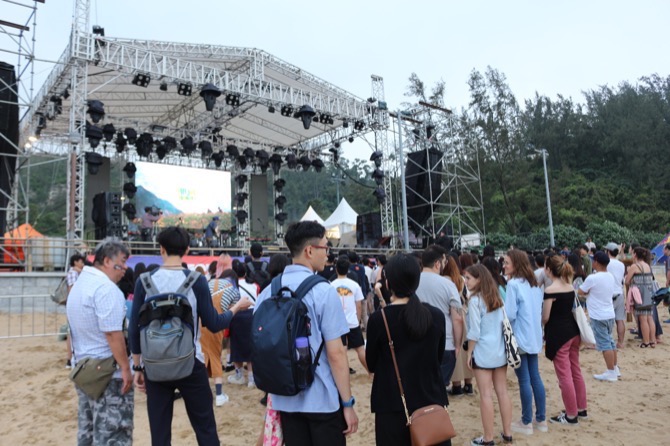 According to organizers, there will be more local performers this year, accounting for 32 of the 39 participating groups.

This year’s event has expanded further to provide a wider range of music to spectators. There are three performance stages, namely the main stage “Hot Wave”, the more relaxing “Summer Chill”, and the “GEG Upbeat Power”.

The GEG Upbeat Power provides a stage for local upcoming young bands with a history of less than three years.

Many connect HUSH! with noise – perhaps ironically – because when the festival premiered in 2005, it mainly staged rock and funk music.

“We have expanded the range of performances. We have since added jazz, chill, folk music, among others, to the stages,” said Philip Cheang, curator and department head at the Cultural Affairs Bureau (IC), the principal organizer of the event.

Cheang said that there are performers from the U.K., the U.S., and Hungary. Collaborations with the cultural and creative industry will also be given a spot during the four- day festival.

Renowned local percussionist Jun Kung will be performing on April 30 with percussionist Steve Thornton, who used to play percussion for jazz master Mile Davis. The show starts at 7:30 p.m. and will feature Latin music.

This year’s HUSH! is the largest edition yet, with the greatest number of performing units and nationalities of performers. Staff reporter