LRT Hengqin extension expected to be completed in four years 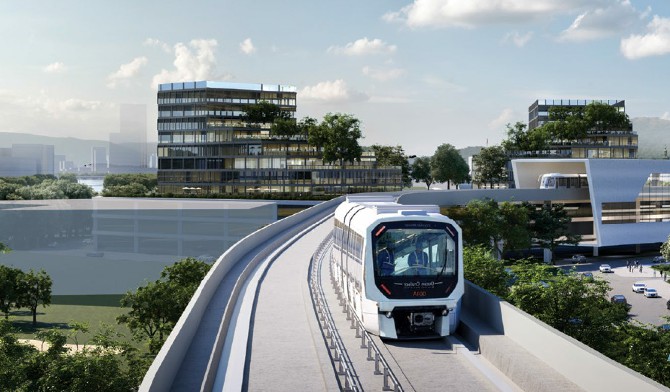 The SAR government announced that the Light Rapid Transit (LRT) extension to Hengqin is aimed to be operational in four years. It will be about 2.2 km in total with 900 meters underground, authorities announced last week.
Nam Kwong (Group) Company Limited has been appointed to construct the extension. The government’s justification for the decision is that the project is a Zhuhai-Macau collaboration. The project is budgeted at MOP3.5 billion and is expected to be completed in four years.
The consolidation of the idea of building the extension came after an extra stop, the Island Hospital Station, was added to the current Taipa Line of the mass transit system. The Island Hospital Station, meanwhile, is located above the roundabout diagonally from the future hospital.
Although the station has been built, it is not yet operational.
However, the idea of linking the previous Lotus Border Checkpoint Building with the current one, which is actually located at Hengqin, has been incubating and discussed for a while, especially after the relocation of the border control building.
An LRT station, the Lotus Border Checkpoint Station, located at the back of the Studio City, caters to users at the checkpoint.
Starting at the Lotus Border Checkpoint Station, the Hengqin Extension Line is a hybrid structure, consisting of flyovers, an underwater tunnel and two stations.
According to the current plan, a connected station will be built aboveground at the Lotus Border Checkpoint Station. The government did not announce, however, if they will be considered within one paid area or passengers need to exit from one station and enter another to get the train to Hengqin.
Similar to the tunnel connecting to the University of Macau, the train will go underground at the river until the Hengqin Border Checkpoint. The government states that the new terminal station will be located right below the checkpoint building.